SACRAMENTO (CBS13) — As the Employment Development Department continues to process a record number of unemployment claims, there are millions of unemployed workers who don't qualify for unemployment.

They are entitled to money through separate pandemic unemployment programs, but they can't apply yet and that is leading to a lot of confusion.

In addition to traditional Unemployment Insurance, there are three new federal programs that are intended to help the millions who are self-employed, business owners, independent contractors, gig workers and those who were unemployed before the pandemic but already used up their annual unemployment benefits.

Federal Pandemic Unemployment Compensation (FPUC) is the program that provides an additional $600 weekly payment to people who are already receiving traditional unemployment benefits.

Pandemic Unemployment Assistance (PUA) is the program that extends unemployment benefits to people who wouldn't normally qualify for unemployment but can't work due to COVID-19. This includes self-employed workers, independent contractors and gig workers.

Then there is the Pandemic Emergency Unemployment Compensation (PEUC) program which extended benefits for people who were already unemployed before the pandemic and who already used up all of their regular unemployment benefits for the year.

But the EDD hasn't rolled out the PUA or PEUC programs yet. The extended wait is leading to a lot of questions and stress.

It's been six weeks without pay for many independent contractors, like a group of hair stylists that CBS13 spoke with. They pointed out that many of them are the family breadwinners.

And it's been six weeks without clear guidance for the self-employed, like realtor John Von Brincken.

"I've been the grandfather that supports two families for the last five years," Von Brincken said. "It's gut-wrenching, hand wrenching, it is absolutely frustrating."

It's been more than six weeks since Mary Parsi got her last unemployment check.

Mary's been looking for work since last summer when she lost her job of 20 years. The 67-year-old former controller has had a hard time finding work at her age. She exhausted her 26 weeks of unemployment just as the pandemic began.

They are just a few of the millions of Californians who are desperate for answers about the new pandemic unemployment programs.

How Will the Self-Employed Apply for PUA?

"The first question is, how do I apply. Where is the app going to be?" Von Brincken asked.

The answer to that question is still not entirely clear. The EDD says people can check its Pandemic Unemployment Assistance page for updates.

CBS13 heard from several people who received messages from the EDD implying that, because they had already applied for unemployment and were denied, they might automatically be enrolled in the PUA program. 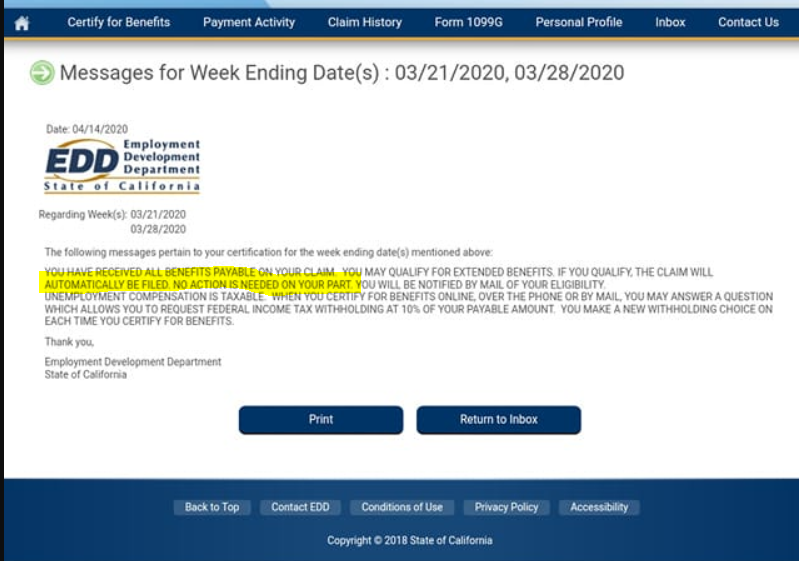 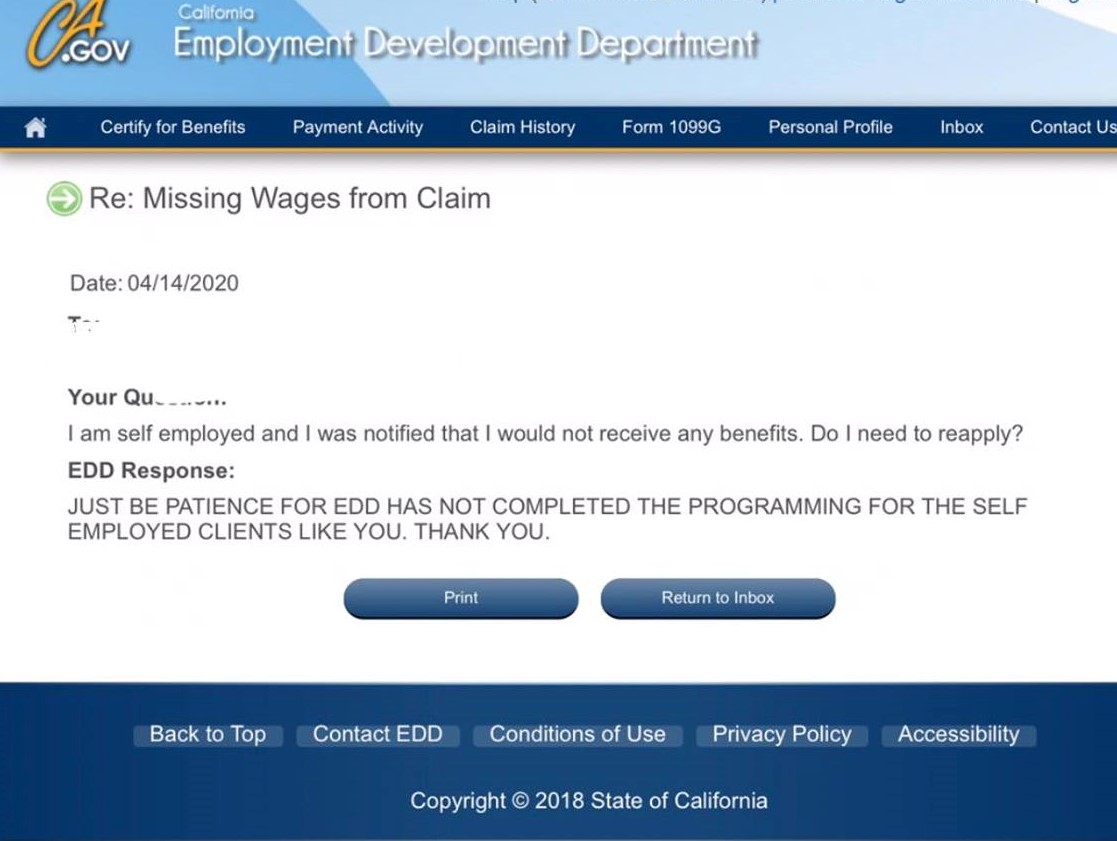 However, the EDD told CBS13 that is not the case:

"Self-employed, independent contractors, and business owners who were denied UI will need apply for the new PUA program. To apply for PUA we will need individuals to self-attest that they are unemployed as a direct result of COVID-19 and provide 2019 income," a spokesperson told CBS13.

According to data that CBS13 obtained from the Department of Labor, at least nine states are already issuing benefits to the self-employed through the PUA program.

EDD says it's still programming its computers but hopes to have California's application ready on April 28 and get payments out within 48 hours after that.

"The fastest way to apply for benefits is through UI OnlineSM. You can also apply for PUA by phone, mail, or fax."

How Much Will the Self-Employed Get Through PUA?

"How much? And how do you establish that?" Von Brincken followed up.

Many are surprised to learn that, unlike traditional workers who get a percentage of their income, California's PUA program will offer a flat rate to the self-employed. The weekly payment is also far less.

The self employed, independent contractors and gig workers will get a flat rate of $167 a week, instead of the normal weekly unemployment payments of up to $450.

However, they will also get the extra $600 per week, for each week they're unemployed between late March through late July.

"Once we are able to complete further programming, we will be able to increase the benefit amount to a maximum of $450 per week if you earned more than $17,368 in 2019. This page will be updated with instructions for reporting additional wages for higher weekly payments."

What About People Who Exhausted EDD Benefits?

"I want to know, how do I apply? And am I going to get any benefit?" Mary asked.

Because she already exhausted her unemployment benefits for the year, her online portal does not give her the option to apply.

We asked the EDD, if people, like Mary, would have to reapply for unemployment under the new federal program.

The EDD told CBS13: "For impacted workers who may have already exhausted their regular state-provided UI benefits, we are developing instructions per the federal requirements recently provided to the EDD. More information will follow."

But for many, like Mary, now waiting six weeks for answers, without pay, she says that's a scary response.

"The stress of not having an answer, it has an extreme effect on my health right now," Mary said.

According to Department of Labor data, so far only two states have started extending benefits for people like Mary under the PEUC program, so EDD is not alone.

However, there is a silver lining for those who are still waiting for the chance to apply: payments will be retroactive. Once the EDD finally rolls out these programs, they will get back-pay for the weeks they have been unemployed.