Boxing promoter the Rev. Fred Sultan (Samuel L. Jackson) decides the best way to revive public interest in his top client's matches is to create a white challenger to his black champion, James "The Grim Reaper" Roper (Damon Wayans). With no white boxers available, he creates one out of dim grunge rocker Terry Conklin (Peter Berg), who once defeated Roper at an amateur match. But while Conklin trains hard, Roper slacks off, endangering Sultan's carefully staged comeback.

The above is the plot synopsis to the movie "The Great White Hype". I've put the movie trailer at the top of the page. A now 21-year old movie that flopped at the box office (just under 10 million) provides a tiny bit of art imitating life. This weekend's fight between Floyd Mayweather and Conor McGregor may not be a perfect match, but there are some eerie lessons to be gleaned. To wit:

The Sultan and his crew (using the media) heavily promote the fight and publicize the white vs. black angle, even fabricating an Irish ancestor for Conklin. The racial angle works, and money starts to pour in.

Who is playing Samuel L. Jackson's Sultan? Take your pick. Al Heyman, Dana White, doesn't matter. Again, its not a perfect match. Conor McGregor is as irish as they come, and I don't believe Dana White is an evil man by a long shot. He's a damn good promoter, who's job it is to make money from fights.....and he's damn good at his job.

Throughout all this, the true top contender to the heavyweight title, Marvin Shabazz (Michael Jace), and his manager Hassan El Ruk'n (Jamie Foxx) are repeatedly denied the rightful chance to a fight, and they proceed to cause a headache for everyone involved in the hype scam.

This is certainly a stretch, but you can squint and see the Shabazz character as sort of a mishmash of Oscar de la Hoya, Gennady Golovkin, and Canelo Alvarez. Just a day ago, Oscar (who is now a fight promoter, after a fantastic boxing career of his own) threw a twitter tantrum, working blue in decrying the fight as a sham. Certainly he understands that fight fans dropping a hundred bucks tonight may balk at dropping another chunk next month on a fight that is truly the best boxing has to offer right now. I understand Oscar's frustration, he did what he was supposed to do- got the two best boxers to face off in the ring, but he's being trumped by the circus we will see tonight.

Floyd Mayweather is one of the top defensive fighters ever, if not the best. He didn't get to 49-0 by rushing in and overwhelming his opponents, he did it by being a virtual cyborg filled with data he collected on each fighter in the first 3-6 rounds. You know the drill: Beginning of a Floyd fight, it seems like the other guy stands a chance. He's more aggressive, lands a couple of glancing blows. The crowd oohs and ahs. As the fight progresses, Floyd begins to make the other guy miss more, and lands a few shots of his own. As the fight enters its final third, it becomes a frustrating scene of Floyd sticking and moving, and the other guy desperately wailing around pissed off that he can't land a thing. 118-110 Floyd, rinse and repeat.

Problem is, Conor McGregor is also a patient fighter. His preference is to allow his opponent to come to him, and then counter his way to damage. When Conor IS aggressive, he uses kicks as his own version of a jab to get past his opponent's guard. That option won't be available against Floyd Mayweather. If you think Conor is going to see an Aldo-like aggression from Floyd, you're dead wrong.

This fight tonight should have a limited number of outcomes:

You get the idea. You'll see Floyd saying

"I definitely won the fight, but he surprised me with (insert speed, power, heart here). I don't really want the rematch, but the fans deserve it". 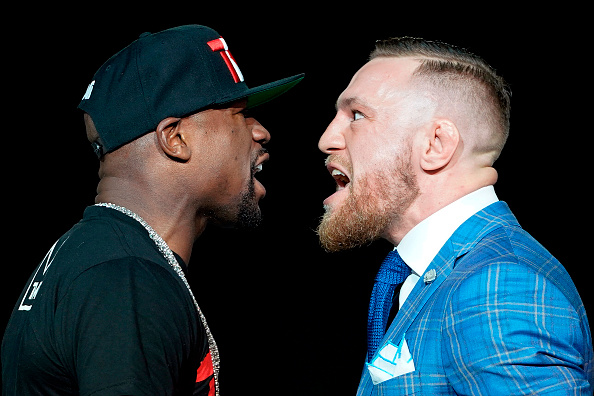 When keeping in mind just how lopsided and ridiculous this matchup is, the New York Times spoke with the head of the Association of Ring Physicians (you know, the ones in charge of making sure these guys don't die in the ring). Consider this excerpt:

The president of the ARP, Larry Lovelace, was stunned to see the McGregor-Mayweather fight was even sanctioned by the Nevada State Athletic Commission.

"We were very surprised this bout was even sanctioned and was going to be permitted to carry on," Lovelace said. "The thing I really fear, truly fear, is that somebody's going to get really hurt in this upcoming fight."

One last note from that article:

in 2015 the NSAC refused to sanction a light heavyweight bout between Andre Ward and Rohan Murdock because the caliber of opponents Murdock had faced to that point in his career was "vastly inferior" to Ward.

Murdock was on a 16 fight win streak, and is currently 19-1. Sure, the NSAC's point is that he might have been fighting cans the entire time, but at least those cans were professional boxers.

McGregor is making his boxing debut against a guy who is 49 and OH.

Bottom line: Its the money, stupid.

Boxing has long been a ridiculously corrupt sport. Unlike the UFC, which holds all their fighters under one banner, boxing is filled with charlatan promoters, alphabet belts, and commissions that can be bought off the same way they were in the olden days. Google "Jose Sulaiman + corrupt" and read for a while. Sulaiman ran the WBC (one of the Big 4 boxing sanctioning bodies). Note that his son took over the WBC when Mr. Sulaiman passed away. Nothing weird there at all.

At this point, I'm sure this article reads as a takedown, one of many, of the fight. Nope. I love it.

Boxing and MMA remain popular because most of us remain instinctively drawn to combat. It releases endorphins that you just don't get from any other major sport. Not football, basketball, baseball....NOTHING compares to the moment the bell rings. You have friends gathered at your house on a Saturday night. The beer is flowing. The undercard plays in the background, with the occasional yelp of "ohhhhhhh" coming from your assembled friends when a good shot lands.

When the main event begins of a really, really intriguing and fun matchup, there is a unique feeling that takes over you. Sweaty hands, heart feeling like it will beat out of your chest, and an eerie quiet broken only by those same exclamations when a punch lands. Its unique because it can end at any moment. First round, Sixth round, you just don't know.

People often use the term "modern-day gladiators", and I get it. Think back to when you were in school, and a fight broke out on the playground. What happened? Everyone ran towards it. Its not an instinct that's taught, in most of us an attraction to combat is embedded in our DNA.

Its why I love this fight. Yeah its a circus, yeah it has no business happening from a purity standpoint. But I've enjoyed the whole thing. The uncomfortable press conference tour was must see TV. Seeing two sharks going at it verbally broke up a fairly boring summer. And tonight I will be surrounded by friends, eating, drinking, and "OOOOHHHHHH"ing.

When that bell rings, and Round 1 begins, my pulse will echo Matt Sorum's classic drum intro on Guns n' Roses' "You Could Be Mine". My hands will be sweaty. And everyone will stop what they're doing and be mesmerized. That in itself reflects a job well done by both fighters and promoters involved.

Who wins? Well, both of them. Floyd has managed to come out of retirement and pocket around 300 million dollars....all to fight a guy making his boxing debut. Think about that for a second.

And Conor? Here's a guy who was on welfare in Ireland not long ago, who in one evening will make more money than all his UFC career income combined. His infant son should never want for anything. The fight itself is secondary, it was the promotion that mattered.

What do I think will happen?

The fight begins, and Conklin gets in only one good punch before the out-of-shape Roper easily dispatches his foe - which was the plan all along.

It was always the plan. And as PT Barnum famously said:

"There's a sucker born every minute".

Sure there is. And most of us are going in with our eyes wide open. Let the games begin.