BUTTE COUNTY, Calif. (CBS13) - The fast-moving Camp Fire in Butte County, California has prompted mandatory evacuations and evacuation warnings in the area of Paradise. Head down the page for the latest updates.

Mandatory Evacuations: (Anyone in need of assistance to evacuate should call 911.)

*NOTE: Depending on your mapping software, this may be different.

An Emergency Volunteer Center is open at Caring Choices, 1398 Ridgewood in Chico. People interested in volunteering can go there or call 530-899-3873 for more information.

9:20 p.m. UPDATE: An evacuation warning is in place for east of Bruce Road between Highway 32 and East 20th Street.

A mandatory evacuation order is in place on Nelson Shippee Road.

An evacuation warning covers parts of Thermalito between Highway 162, Highway 149, Highway 70 and Highway 99.

8:30 p.m. UPDATE: CBS13's Rachel Wulff spoke with Butte County Sheriff Kory Honea earlier tonight about the department's efforts to prevent looting as well as the plans as the night wears on.

8:00 p.m. UPDATE: Cal Fire says the town of Paradise has been wiped out by the Camp Fire. While crews are still evaluating the damage, they estimate more than 1,000 buildings were damaged in the fire.

More evacuations have been ordered on the Oro-Chico Highway—which is west of Highway 99— from Durham Dayton to Estates Drive.

Highway 99 has been closed in both directions from Southgate Avenue in Chico to the Highway 149 junction.

7:50 p.m. UPDATE: A new evacuation order is in effect from Highway 70 to the lake, south to Table Mountain Boulevard

7:30 p.m. UPDATE: Cal Fire officials have confirmed multiple people have died as a result of the Camp Fire.

The Butte County Sheriff's Office doesn't have an exact number on how many have died, as it is assessing the scene.

An evacuation warning is in effect for areas west of Highway 99 between Highway 149 and the Chico City Limits, west to the Midway.

7 p.m. UPDATE: An evacuation order is in place at Nopel Road at Highway 32 to the city limits of Chico, but does not include the city of Chico.

Highway 99 has been closed in both directions from Durham Pentz Road to Neal Road over visibility concerns. Caltrans has reported the fire jumped the canyon, closing Highway 32 at Yosemite Drive.

Video from the scene shows the fire has jumped Highway 99 near Durham-Pentz Road.

5:50 pm. UPDATE: Winds are fueling the flames in Paradise, leaving devastation in its wake.

5:15 p.m UPDATE: Some of the evacuated animals are at Erickson Veterinary Hospital in Chico.

4:45 p.m. UPDATE: The Neighborhood Church Shelter in Chico is full. There are two other shelters available.

A Cal Fire chief has cited reports of several hundred structures destroyed in the Camp Fire. Officials have not gotten in to assess the situation.

4:30 p.m. UPDATE: Schools in Butte County will be closed on Friday as a result of the Camp Fire.

The closure includes all schools, not just ones served by the Butte County Office of Education

4:15 p.m. UPDATE: CBS13's Lemor Abrams spoke with a driver who was evacuating with his pregnant wife. The couple had just bought their first home and are afraid it may be gone.

"Families in Butte County are in the midst of dealing with the devastating Camp Fire. They should not have to worry about whether they're being illegally cheated out of fair prices. Our State's price gouging law protects people impacted by an emergency from illegal price gouging on housing, gas, food, and other essential supplies. I encourage anyone who has been the victim of price gouging, or who has information regarding potential price gouging, to immediately file a complaint through my Office's website or call (800) 952-5225, or to contact their local police department or sheriff's office."

3:50 p.m. UPDATE: Crews are using the field at Butte College as a landing space for medical helicopters. Classes at the college were canceled as a result of the Camp Fire

1:58 p.m. UPDATE: Evacuation orders have been announced for for Nimshew, Lower Clark, and Lower Skyway zones.

If you've evacuated to a shelter, you're asked to register on Red Cross' Safe & Well website.

Have you noticed that there haven't been any air tankers flying over the Camp Fire? A Cal Fire spokesperson explained why.

1:24 p.m. UPDATE: Five people have already been burned in Paradise, the CHP says.

1:11 p.m. UPDATE: CHP in Oroville are working to close northbound Traffic on Highway 99 into Chico as the fire heads toward the city.

Rachel Wulff has this 12:54 p.m. update from Butte County.

12:45 p.m. UPDATE: Traffic on Highway 70 was only heading out of Paradise as the evacuations continue.

12:31 p.m. UPDATE - The California Office of Emergency Services has activated has been activated in support of the Camp Fire.

The latest coverage on CBS13.com:

11:58 a.m. UPDATE: An evacuation order has been issued for the area of Highway 70 from Concow South including all of Yankee Hill on both sides of 70, Butte County Sheriff says.

A hospital in Paradise evacuated its patients as the Camp Fire, which was sparked early Thursday, got uncomfortably close.

11:09 a.m. UPDATE: CBS13's Rachel Wulff is heading up to the Paradise area to report on the Camp Fire. Follow her for updates throughout the day. 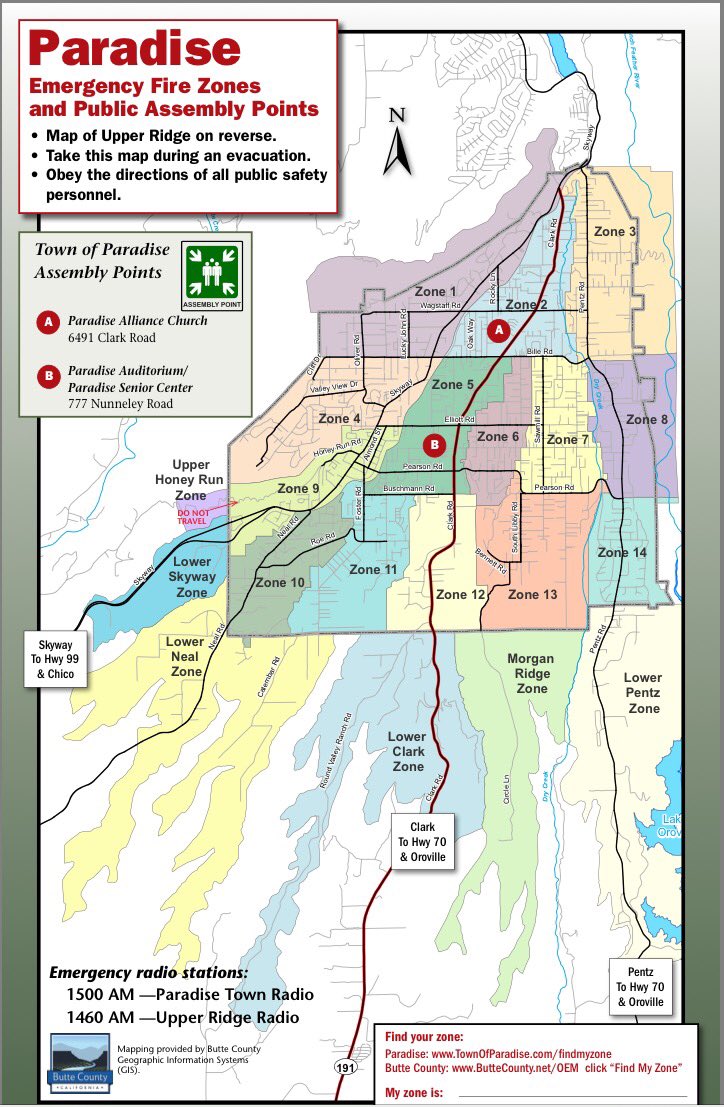 10:33 a.m. Update: All classes at Butte College have been cancelled and the main campus is being evacuated where it's reportedly raining ash.

10:22 a.m. UPDATE: Butte County has issued the following information on shelters for people and pets.

When evacuating, take your animals with you. Make sure to bring water, food, bedding, and any containment devices necessary, the county urged in a statement.

10:12 a.m. UPDATE: An evacuation warning has been issued for the Lower Neal and Upper Honey Run zones.

9:46 a.m. UPDATE: Thousands of PG&E customers are without power in Butte County because of the fire.

The sheriff's department urges anyone in need of assistance is needed to evacuate to call 911.

9:31 a.m. UPDATE: Images are coming in from the area of the Camp Fire.

9:21 a.m. UPDATE: Follow these social media accounts for the latest developments in the Camp Fire:

9:04 a.m. UPDATE: ALL of Paradise except Lower Clark Road, Lower Neil Road, and Lower Skyway Road are under mandatory evacuation orders. People are being told to leave right away.

BUTTE COUNTY (CBS13) - Mandatory evacuations have been issued for areas near Paradise in Butte County because of a wildfire that has grown to over 1,000  acres on Thursday morning.

The fire is moving towards the hospital on Pentz Road. All of Paradise is being told to evacuate. Fire zones 2,7,13, And Morgan Hill are now under mandatory evacuation, according to a  statement from CHP - Oroville.

The fire is burning in the area of Camp Creek Road near Highway 70 in the Feather River Canyon, according to a statement from Cal Fire and the Butte County Fire Department.

Dozens of firefighting resources from across the state have bee called to assist in battling the fire.

Check back for the latest updates.