AUBURN (CBS13) - The Old Auburn Firehouse is the pride of the city. On Monday, police made a shocking discovery that has the community concerned.

The Auburn police department tells CBS13 that a crawl space is typically used for construction purposes to help maintain Auburn's century-old firehouse but police discovered someone had been living in the crawlspace.

"It doesn't even seem humanly possible, and they were living in there?" said Sydni Shepherds, who has lived in Auburn for years.

She was shocked to see an eviction notice not on a home or apartment door but on a boarded-up crawl space beneath the landmark. 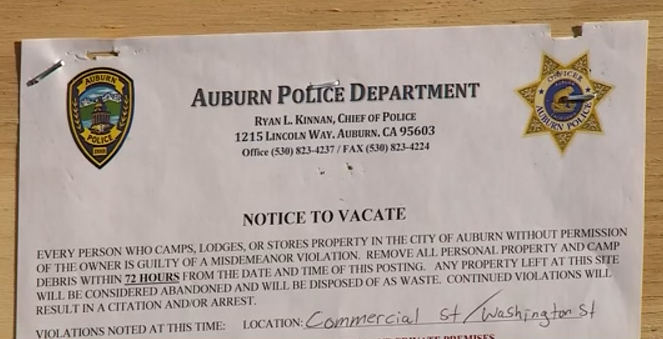 "These holes don't seem any human can fit nor live there. To see an eviction sign for a human it's very sad," she said.

The Auburn Police Department says a person experiencing homelessness was camping inside of the hole.

"There were quite a few possessions," said Auburn Police Department Officer Anthony Davis

The department sent out their Community Action Team immediately after making the discovery.

"[It] specializes with community outreach on homelessness. Their mission is to provide them with shelter medical, whatever they're needing," he said.

Police then posted a 72-hour warning to claim belongings. They're thankful they caught the campers before things got worse.

"We do have issues with warming fires. Within the county, we don't want them under there causing warming fires. You see how small the hole is; it's going to make it difficult for us to get in there if there was a medical emergency inside," he said.

Built in 1852, the firehouse will always be a priority for the community.

"It is very much the center point of Auburn," said Shepherd.

"It's sad to me that someone felt the need to camp underneath our firehouse," said Calvillo.

The person experiencing homelessness was not able to access the inside of the firehouse from the crawl space.

They will have 72 hours to get their belongings back. They will likely be charged with trespassing and illegal camping.