10 p.m. UPDATE: A suspect tried to hide with students who were evacuated from a high school football game after a deadly shooting.

A 16-year-old boy was killed and an 18-year-old male was critically injured in a shooting near Bell Avenue and Washington Street. Two suspects were arrested following the shooting.

The shooting prompted a lockdown at the nearby junior varsity high school football game between Bethel High School and Armijo High School. Students were evacuated to a nearby gym.

Photos inside the Armijo High School gym show a frightening scene where a crowd, following police orders, have their hands on their heads as they sheltered in place.

"I do understand he was taken into custody without incident," said Fairfield Police Lt. Greg Hurlbut.

Families along with football players were released from the lockdown after the police determined both suspects had been found. The other suspect was found in a nearby home.

The calls to shelter in place came just as the JV football game had started. About 500 people crowded inside the gym while others were sheltered in locker rooms and the school library. Parents were left concerned, trying to figure out of their children were safe.

The varsity football game scheduled for Friday night was cancelled.

8:10 p.m. UPDATE: A 16-year-old has died and an 18-year-old is in critical condition after a shooting near Armijo High School on Friday.

Two juvenile suspects were arrested in the shooting. One of them was found in the school gym.

Police ordered a lockdown of nearby Armijo High School after two of the suspects took off running. A JV football game taking place at the time was evacuated and students were moved into the gym.

One of the suspects was found inside that gym attempting to blend in, while another was arrested at a nearby house.

Police have arrested two suspects. Two people who were shot.

7 p.m. UPDATE: The varsity football game between Bethel and Armijo has been canceled.

The lockdown started during the JV football game, and police moved students to the locker room and gym while the search continued.

FAIRFIELD (CBS13) — Fairfield Police have closed down Armijo High School as they search for a suspect in a crime officers believe ran on campus.

A suspect in a nearby shooting is being sought. Police are seeing if the suspect made his way onto the campus.

The shooting was not on the campus, but was close enough that officers believed one of the suspects may have made their way to the campus.

The shooting happened near Bell Avenue and Washington Street. 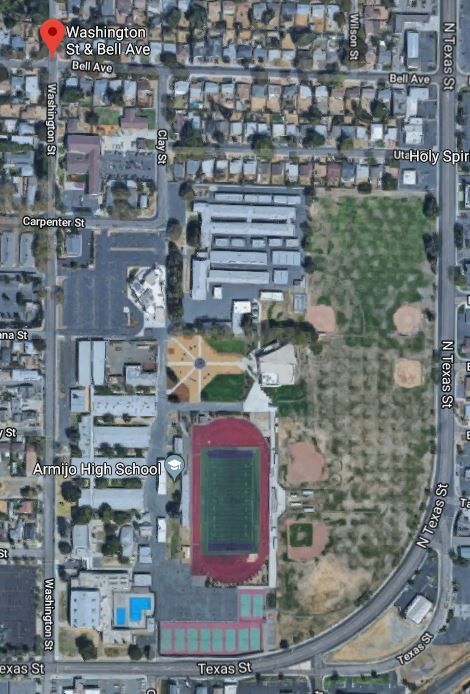 This is a developing story, check back for more details.