SACRAMENTO (CBS13) — Another CBS13 viewer says she's being denied health care, because her insurance is through Covered California.

On Tuesday, we told you about a Sonora man with the same problem—unable to find a surgeon to provide a desperately needed operation on his back.

After that story, we had responses from across the country. One viewer said she did months of research before picking the plan that Blue Cross recommended. But it's still been a nightmare.

Katherine Cadman says her emails and calls aren't getting anywhere. She says she signed up for an Anthem Blue Cross Plan, but doctors keep refusing to see her.

"It's just not right," she said. "It does make you feel like you're a second-class citizen."

Chris and Tammy Dunn told us the same exact thing about their experience trying to find a doctor to fix Chris' back. He says an in-network doctor turned him down.

When we again reached out to Anthem again for answers on Wednesday and they issued the following statement:

"Our records indicate that this doctor has a contract with Anthem Blue Cross to treat our Covered CA members, and we will reach out to him to determine what the issue is."

The doctor's office gave us a flat no comment.

"The doctors get to pick who they want," said Tammy.

But what's really going on here? The bottom line in both cases is money.

We went in search of answers and learned some doctors won't accept patients with insurance through Covered California—the state-run implementation of the Affordable Care Act. In some cases, doctors say they reimbursement rates are lower.

Anthem tells CBS13 it can't force an in-network doctor to give care, and that the doctor can terminate its contract.

This leaves the Dunns and Cadman feeling like they're left with few options.

"Anthem's a big umbrella, but we're standing at the edge of the umbrella and we're getting wet, because we're not getting what regular subscribers are getting," Cadman said. 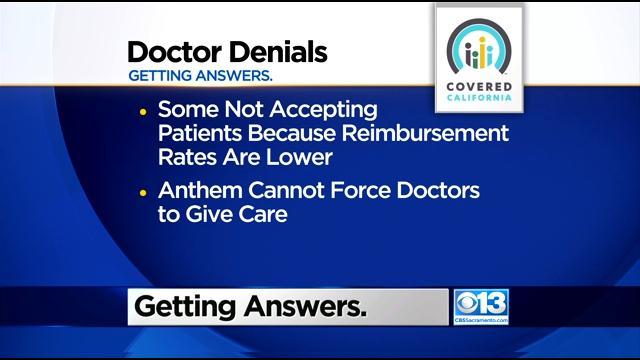 Viewers on back-to-back nights have complained to us it isn't.

"What are we left with as far as being Covered California subscribers?" Cadman asked. "The bottom of the barrel?"

The other issue we've reported on are inaccurate doctors lists. Several times, Covered California has taken down its online director because the lists they were getting from providers had too many mistakes.