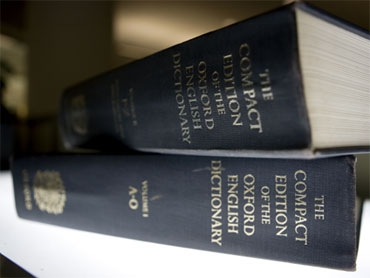 It's been in print for over a century, but in future the Oxford English Dictionary - the authoritative guide to the English language - may only be available online.

Oxford University Press, the publisher, said Sunday that burgeoning demand for the dictionary's online version has far outpaced demand for the printed versions.

By the time the lexicographers behind the dictionary finish revising and updating the latest edition - a gargantuan task that will take many more years - publishers are doubtful there will still be a market for the printed form.

"At present we are experiencing increasing demand for the online product," a statement from the publisher said. "However, a print version will certainly be considered if there is sufficient demand at the time of publication."

Nigel Portwood, chief executive of Oxford University Press, told The Sunday Times in an interview he didn't think the newest edition will be printed. "The print dictionary market is just disappearing. It is falling away by tens of percent a year," he said.

His comment related primarily to the full-length dictionary, but Portwood said the convenience of the electronic format also is affecting demand for its shorter dictionaries.

It's too early to predict whether digital dictionaries will completely wipe out the printed format, and Portwood stressed that Oxford University Press has no plans to stop publishing print dictionaries. Still, more and more people are taking advantage of the speed and ease of using the online version, which charges a subscription fee of $295 a year in America.

Talking to shoppers in London's Camden Town outdoor market on Sunday, everyone knew about the Oxford English Dictionary, but few had ever used the 20-volume edition.

Even writer Ben Robinson - who owns a micro-print version of the full Oxford that requires a magnifying glass to read - said he rarely uses it these days.

Instead, he said in a telephone interview, he regularly consults the online Oxford English Dictionary, or finds an iPhone dictionary and thesaurus even handier.

Robinson said he would "mourn" the loss of the print Oxford English Dictionary, but that an online-only Oxford could be a plus by "giving more people access to it."

Launched in 2000, the online Oxford also makes it easier for its publisher to catch up with rapid semantic changes and the large numbers of new words.

Editors put updates out every three months. In March, for example, they added words such as "techy" and "superbug" to the online version.

The dictionary was first published in parts starting in 1884. It kept growing for decades until the complete text went out in 1928 - 70 years after preparations first began.

It was the first comprehensive English dictionary since Samuel Johnson's "A Dictionary of the English Language" published in 1755, and has since evolved to become the accepted authority on the meaning and history of words.

The version users now consult - the second edition - has 291,500 entries, plus 2.4 million quotations as sources. Unlike shorter printed versions such as the single-volume Oxford Dictionary of English, it doesn't track current usage.

A team of 80 lexicographers are preparing the third edition of the dictionary, which is just one-quarter finished. Oxford University Press hasn't yet given a date for when the third edition will be ready, but Portwood says it will take more than a decade.

In December, the online version will be relaunched to include a historical thesaurus to make cross-referencing easier.
By Associated Press Writer Sylvia Hui