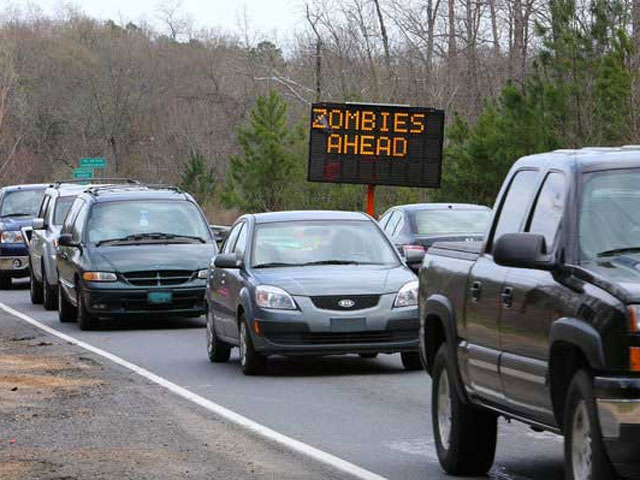 A zombie apocalypse is probably the last thing you need on your morning commute. But that's what drivers on South Carolina's Highway 160 had to look out for, as a road work sign cautioned: "Zombies ahead."

The Herald of Rock Hill reports that one of the electronic signs near Fort Hill, S.C., which normally flashes messages about construction or crashes, read "Zombies Ahead" as well as "Watch for Hunters," while a sign on the other side of the road said "Be alert for Tanks."

Ken Wilson, of the S.C. Department of Transportation, says a key is needed to get into the control boxes for the signs. A code is needed to change the wording.

While there is no explanation of who changed the message or how, Wilson does not see much cause for worry. "The message could have been a lot worse than is was," Wilson told the Herald. "In my opinion, it was a prank."

Simple prank? Or warning of a future undead cataclysm? Regardless, the Herald and Associated Press confirmed there have been no reports of undead or tanks in the Fort Hill, S.C., area.