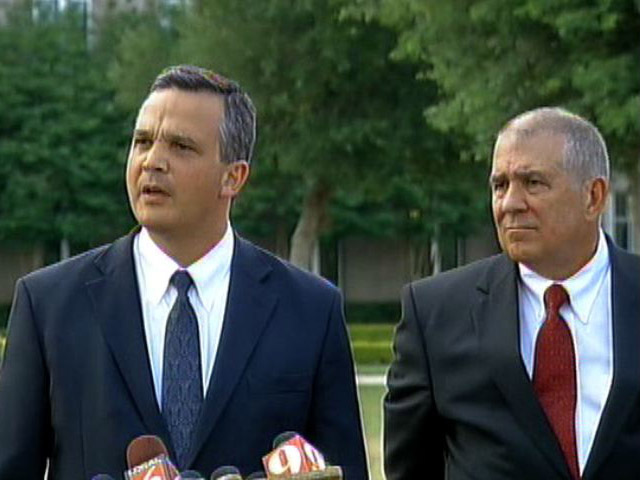 (AP) SANFORD, Fla. - Two attorneys for the Florida neighborhood watch volunteer who fatally shot 17-year-old Trayvon Martin said Tuesday that they have withdrawn as his counsel because they haven't heard from him in days and he is taking actions related to the case without consulting them.

Attorney Craig Sonner and Hal Uhrig said at a news conference they haven't heard from George Zimmerman since Sunday. They said that against their advice, Zimmerman contacted the special prosecutor who will decide if he should face charges. A spokeswoman for Angela Corey's office didn't immediately respond to an email and two phone calls.

Zimmerman says he shot Martin in self-defense after following the teenager in a Sanford, a gated community outside Orlando on Feb. 26. He said after he followed Martin for a time, he was returning to his truck when the teen attacked him. He shot the unarmed teen to death during the altercation.

Sonner said they legal team had talked to Zimmerman almost every day the last couple months.

"As of the last couple days he has not returned phone calls, text messages or emails," Sonner said. "He's gone on his own. I'm not sure what he's doing or who he's talking to. I cannot go forward speaking to the public about George Zimmerman and this case as representing him because I've lost contact with him."

Attorney Hal Uhrig said that his legal team is still concerned about Zimmerman, who he said is "not doing well emotionally" and may be suffering from post-traumatic stress disorder.

CBS News senior legal analyst Andrew Cohen said that the withdrawal should not impact the investigation. "It will not determine the outcome of the case. But the publicity surrounding today's [announcement] can only help Zimmerman, despite the withdrawal, because it gives these guys a chance to humanize Zimmerman and try to portray him as a sympathetic figure."

The split came as special prosecutor Angela Corey neared a decision on whether to charge Zimmerman with a crime in the Feb. 26 shooting.

That decision could come later this week, as Corey released a brief statement late Tuesday saying she would make an announcement about the case within 72 hours. She did not specify what new development in the case would be released.

The lack of an arrest has led to protests across the nation and spurred a debate about race and the laws of self-defense. Zimmerman's father is white and his mother is Hispanic.

Craig Sonner, the first attorney Zimmerman contacted, said he agreed to take the case on a pro bono basis until Zimmerman is perhaps charged.

Sonner said he has never talked to Zimmerman face-to-face and that the 28-year-old man has gone into hiding but that he believes he's still in the U.S. Both attorneys said they'd be willing to represent him again if he asks.

Ben Crump, an attorney for Martin's family, said they're concerned that Zimmerman could be a flight risk if he is charged with a crime since his now-former attorneys don't know how to contact him.

"At this point, we're just concerned that nobody knows where he is at. Nobody knows how to get to him," Crump said.

Zimmerman set up a website therealgeorgezimmerman.com to collect money from his supporters, but the attorneys didn't know about it until they started getting questions from the media, Sonner said.

"I am the real George Zimmerman," the website said. "As a result of the incident and subsequent media coverage, I have been forced to leave my home, my school, my employer, my family and ultimately, my entire life."

That portrait of his life since the shooting was confirmed by his attorneys.

Sonner said that he stands behind his statements that Zimmerman did act in self-defense, however, "I just can't proceed to represent a client who doesn't stay in contact with me."