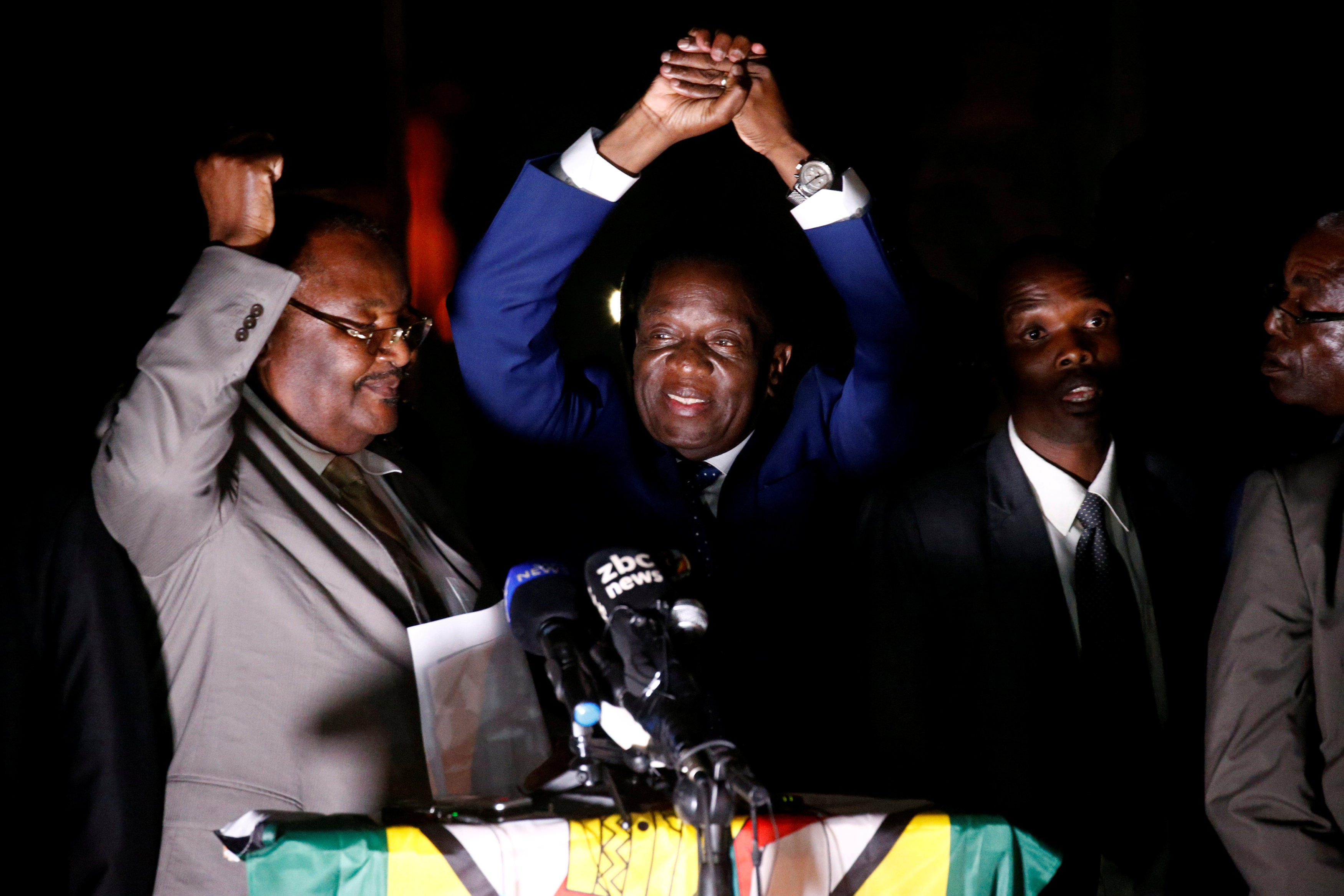 JOHANNESBURG -- Emmerson Mnangagwa is set to be sworn in Friday as Zimbabwe's only president other than Robert Mugabe, who has ruled since 1980.

Mugabe, 93, stepped down on Tuesday form power on Tuesday and has not been seen in public since Sunday. Mugabe and his wife's whereabouts are unknown, BBC News reports. State TV reported Mugabe would be at the swearing-in.

Ruling party ZANU-PF assured Mugabe he would not be prosecuted if he stepped down, party chief whip Lovemore Matuke told The Associated Press: "He is safe, his family is safe and his status as a hero of his country is assured."

Friday's ceremony will be at the 60,000-capacity National Sports Stadium in the capital, with organizers calling on Zimbabweans to come and witness a "historic day," according to BBC News.

Ahead of the swearing-in, Mnangagwa urged Zimbabweans to "remain patient and peaceful and desist from any form of vengeful retribution."

Mnangagwa, widely known as the Crocodile, is seen as a smart, ruthless politician, and many question if he will be able to bring the change the country craves.

"We are witnessing the beginning of a new, unfolding democracy," the 75-year-old announced Wednesday upon his return to the country, two weeks after his firing by longtime mentor Mugabe led to the president's downfall.

Despite the message of inclusion, Zimbabweans noted that Mnangagwa made his first public remarks outside ruling ZANU-PF party headquarters and, switching to the local Shona language, praised the party.

They ask whether Mnangagwa will be adequately independent from ZANU-PF to revive the battered economy and restore democracy with the backing of the opposition and others.

On Thursday, the opposition MDC-T party said it had not been invited to Mnangagwa's inauguration Friday morning at a 60,000-seat stadium. That's after the MDC joined the efforts to remove Mugabe, seconding the motion in Parliament to impeach him.

Mnangagwa's remarkable rise to power - from being sacked as vice president and fleeing the country to being named Zimbabwe's next leader - was largely thanks to the military, which put Mugabe under house arrest, and ruling party lawmakers who introduced the impeachment proceedings.

It is widely expected that Mnangagwa will continue to rely on them.

"Can a crocodile change its scales? Everybody is asking that question. Certainly his first speech was a lost opportunity. He did not speak about the need for an inclusive government," said Piers Pigou, southern Africa expert for the International Crisis Group. "He has a long past with ZANU-PF and the military and that past may stick to him like chewing gum on a shoe."

Pigou said more will be known when Mnangagwa announces his new government and policies. "It will be difficult for him to escape his history," he said. "But the door is open."

Mnangagwa served for decades as Mugabe's enforcer and among Zimbabwe's population, he is more feared than popular. He now urges the country to come together, to "bury our differences and rebuild a new and prosperous Zimbabwe, a country that is tolerant to divergent views."

For weeks before the political turmoil erupted, Mnangagwa had been publicly demonized by Mugabe and his wife, Grace, who was seeking to succeed her 93-year-old husband in power.

That gave Mnangagwa time to prepare his strategy. Within days of his firing, his supporters in the military put Mugabe and his wife under house arrest.

When Mugabe refused to resign, a massive demonstration backed by the military brought tens of thousands of people into the streets of the capital, Harare. It was not a spontaneous uprising. Thousands of professionally produced posters praising Mnangagwa and the military had been printed ahead of time.

Mnangagwa's links to the military and ruling party go back decades. He joined the fight against white minority rule in what was then Rhodesia while still a teen in the 1960s. In 1963, he received military training in Egypt and China. As one of the earliest guerrilla fighters he was captured, tortured and convicted of blowing up a locomotive in 1965.

Sentenced to death by hanging, he was found to be under 21 and his punishment was commuted to 10 years in prison. He was jailed with other prominent nationalists including Mugabe.

While imprisoned, Mnangagwa studied through correspondence courses. After his release in 1975 he went to Zambia, where he completed a law degree and started practicing. Soon he went to newly independent Marxist Mozambique, where he became Mugabe's assistant and bodyguard. In 1979, he accompanied Mugabe to the talks in London that led to the birth of Zimbabwe.

"Our relationship has over the years blossomed beyond that of master and servant to father and son," Mnangagwa wrote this month of his relationship with Mugabe.

When Zimbabwe achieved independence in 1980, Mnangagwa was appointed minister of security. He directed the merger of the Rhodesian army with Mugabe's guerrilla forces and the forces of rival nationalist leader Joshua Nkomo.

In 1983, Mugabe launched a brutal campaign against Nkomo's supporters that became known as the Matabeleland massacres for the deaths of 10,000 to 20,000 Ndebele people in Zimbabwe's southern provinces. Mnangagwa was widely blamed for planning the deadly campaign of the army's North Korean-trained Fifth Brigade. Mnangagwa denies it.

He also is reputed to have amassed a considerable fortune. He was named in a United Nations investigation into exploitation of mineral resources in Congo and has been active in making Harare a significant diamond trading center.

In 2008, Mnangagwa was Mugabe's agent in an election marked by violence and allegations of vote-rigging, leading him to be placed under U.S. sanctions that continue to this day. He also helped broker the creation of a short-lived coalition government that brought in opposition leader Morgan Tsvangirai as prime minister.

In recent years, Mnangagwa promoted himself as an experienced leader who would bring stability to Zimbabwe.

Despite his bloody past, "some people see redeeming features in Mnangagwa," said Tichaona Zindoga, political editor of the state-run Herald newspaper. "He is seen as business-oriented, which may help him improve the economy."

However, Zindoga added, "politically his ties to ZANU-PF cannot be wished away. And the events of the past two weeks mean that he is ingratiated to the military."