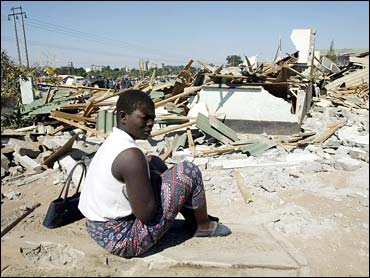 The Zimbabwe government's campaign to clear the homes, businesses and even the gardens of the poor from its cities has sparked more violence, a pro-government newspaper reported Wednesday, as state radio claimed the displaced are being provided for.

The U.N. estimates that as many as 1.5 million people so far have been made homeless by police burning or bulldozing their shacks out of existence in what the government calls a clean up campaign in the cities. The political opposition, which has its base among the urban poor, says the 4-week-old Operation Murambatsvina, or Drive Out Trash, is meant to punish its supporters.

A U.N. spokesman said Monday that Anna Tibaijuka, the Tanzanian head of UN Habitat, will visit Zimbabwe soon to assess the impact of Operation Murambatsvina.

He said Britain has done much to focus global attention on the shaky human rights record in Zimbabwe - a former British colony - but those efforts have run up against a lack of interest in Africa to do anything about it.

"Unless, and until, Africa's leaders as a whole recognize what is going on (in Zimbabwe), take action not just to condemn it but deal with it, we are likely to be in for many more months of this kind of tyranny until president Mugabe moves aside," said Straw.

The Mugabe government said Tuesday that besides knocking down shacks and the kiosks of street vendors, police are intensifying efforts to destroy vegetable gardens the urban poor plant in vacant lots around Harare, saying the plots threatened the environment.

The pro-government Daily Mirror reported Wednesday that there has been rioting by scores of people resisting demolitions in the Marondera and Wedza townships, 68 miles east of Harare on Tuesday.

Police spokesman Darlington Mathuthu told the newspaper police had to call for reinforcements and arrested at least eight people who had been involved in running battles with security forces.

Such violence has not been uncommon since the campaign started May 19. Thousands of urban poor have had their homes burned or bulldozed, or pulled them down themselves on orders given at gunpoint. Babies, the terminally ill and the elderly have been forced to sleep out in freezing midwinter temperatures.

State radio, though, said Wednesday some of those displaced had been moved to a farm 19 miles east of Harare. The broadcast said charities are working with the government of President Robert Mugabe to turn the site "into a healthy comfortable destination."

"Some families have already been resettled after vetting," said Inspector Eunice Marange, the police officer in charge of what the state radio said was a "transit camp" at Caledonia.

"The Ministry of Health and Child Welfare has since moved in to vaccinate children and provide other services, while accommodation, water and food have also been made available," Marange told the radio.

The opposition Movement for Democratic Change says "vetting" means proving loyalty to Mugabe's ruling Zimbabwe African National Union-Patriotic Front party, with suspected opposition supporters being forced into the countryside for "re-education," under a policy similar to that of the former Pol Pot regime in Cambodia, which forced huge numbers of people out of the cities to prevent unity among his opponents.

Over the weekend, independent journalists reported there was one toilet for 3,000 people at Caledonia Farm, with new arrivals required to register with local ZANU-PF officials before they were allowed to line up for it.

They also reported a heavy presence at Caledonia of secret police agents who said they wanted to hear what the people said and to see who visited them.