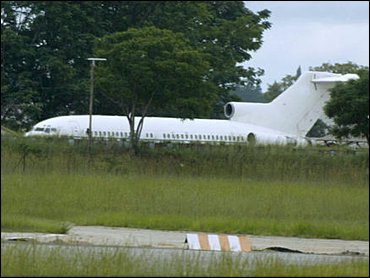 The Boeing 727-100 was detained at Harare's main airport late Sunday after its owners allegedly made "a false declaration of its cargo and crew," Home Affairs Minister Kembo Mohadi said at a briefing.

"The plane was actually carrying 64 suspected mercenaries of various nationalities," he said. "Further investigations also revealed that on board was military material."

Mohadi said more details would be released once officials have established "the true identities of the men and their ultimate mission."

The plane was moved to the nearby Manyame military base for further investigation, he said.

In Washington, a State Department official, asking not to be identified, said the Zimbabwean government has not raised the issue with the United States. The official added that the United States has no indication that it is an American plane or that any American citizens are involved.

U.S. Embassy officials said they had not been informed and were trying to obtain details from Zimbabwe authorities.

State-run TV broadcast footage of a white plane with the tail number N4610. Inside the aircraft, the station showed two satellite telephones, radios, blue backpacks, sleeping bags, hiking boots, an inflatable raft, paddles, bolt cutters and what appeared to be a can of mace.

No weapons were shown, but the station said officials were still going through the cargo section.

According to a database of U.S. aircraft registrations, the plane Zimbabwe claimed to have detained is registered to Dodson Aviation Inc. of Ottawa, Kan.

A company official, J.R. Dodson, told CBS News.com that he sold the aircraft to a South African mining company called Logo Limited about a week ago.

Passengers and crew, all of them "heavily built males" and most of them white, were also taken to the base, where a detention barracks is located, state television reported.

Journalists were not shown the plane and the government's claims could not be independently verified.

President Robert Mugabe repeatedly has accused the United States and Britain of plotting to overthrow him.

In 1999, three American missionaries were arrested at Harare International Airport trying to board a homeward Swissair flight with a stockpile of more than 20 rifles and handguns in their baggage.

Accused of plotting to assassinate Mugabe, they were jailed for eight months. They said the arms were for self-defense during three years of work among converts in war-torn Congo.

Zimbabwe faces its worst political and economic crisis since independence from Britain in 1980. The government's often-violent seizure of thousands of white-owned farms for redistribution to blacks has plunged the country into turmoil.