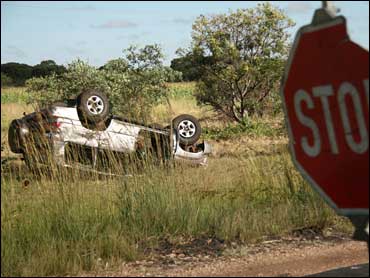 The prime minister's party on Saturday called for an investigation into the car crash that injured Morgan Tsvangirai and killed his wife, but warned Zimbabweans not to jump to conclusions about the cause.

Rumors that the crash that killed Susan Tsvangirai was not an accident were inevitable given the history of political violence in a country battered by economic and humanitarian crisis.

"We cannot talk of foul play ... until it has been proved what has really transpired," said Tendai Biti, Tsvangirai's No. 2 in the Movement for Democratic Change party and the country's new finance minister.

He added that the crash "could have been avoided" had Tsvangirai been afforded the kind of motorcade that usually travels with President Robert Mugabe. At a news conference at party headquarters in Harare, Biti called for an investigation.

Dr. Douglas Gwatidzo, head of casualty at the hospital, said the prime minister had head injuries and chest pains but was stable. State television showed pictures of Tsvangirai in a neck brace, which Gwatidzo said was being used to keep him comfortable.

The crash occurred Friday evening on the outskirts of the capital on a decrepit road notorious for accidents. Like many in Zimbabwe, the road is in poor condition because it has not been maintained.

A U.S. Embassy official, speaking on condition of anonymity because the official spokesman was not immediately available, said Saturday that the truck involved was transporting AIDS medicine donated by the U.S. government. It was driven by a Zimbabwean contracted by the United States.

Police spokesman Superintendent Andrew Phiri told the state-run newspaper The Herald the truck may have struck an object on the road before it veered.

The Herald also reported Saturday that the two other people in Tsvangirai's car - the driver and a bodyguard - were also injured. The paper added the driver and occupants of the truck were taken to a police station, but it was unclear whether they had been arrested.

Susan Tsvangirai, 50, was pronounced dead soon after arrival at a clinic about 25 miles from Harare, said Ian Makone, a secretary in the prime minister's office and a member of his party. Makone said her children were flying to Zimbabwe from Australia and South Africa and funeral arrangements were being made.

The Tsvangirais, who married in 1978 and had three daughters and three sons, often went together to political events, but Susan Tsvangirai did not have a prominent public role. Friday, they had been headed to a weekend rally in his home region, south of Harare.

Susan Tsvangirai once ran her own sewing and catering businesses, according to an obituary issued by her husband's party Saturday. After her husband, a former labor union leader, went into politics, she turned her attention to women's and children's welfare issues, founding a trust that sponsored health, education and feeding projects.

Britain and the United States, both supporters of Tsvangirai, sent condolences. South Africa, which played a key role in negotiating a power-sharing deal that made Tsvangirai prime minister, also expressed condolences.

President Mugabe spent about an hour at the hospital late Friday. He and other senior aides who also visited did not speak to reporters or Tsvangirai supporters gathered outside.

Tsvangirai, who turns 57 next week, was sworn in Feb. 11 as Zimbabwe's prime minister in a power-sharing deal meant to end almost a year of deadly stalemate with Mugabe. The unity government was formed under pressure from neighboring governments who wanted Zimbabwean leaders to turn their attention to a growing humanitarian and economic crisis after years of rivalry between Tsvangirai and Mugabe, who has been in power since independence from Britain in 1980.

Zimbabwe has the world's highest official inflation rate, a hunger crisis that has left most of its people dependent on foreign handouts and a cholera epidemic blamed on the collapse of a once-enviable health and sanitation system.

Tsvangirai formed his Movement for Democratic Change a decade ago. As it emerged as a serious political challenger, Tsvangirai repeatedly faced the wrath of Mugabe's ZANU-PF. He has been beaten and was once nearly thrown from a 10th floor window by suspected government thugs.

Tsvangirai's party on Saturday quoted his wife as once saying there were times when she so feared for her husband's safety that "sleeping was no longer part of my life. I just prayed.

"But at the end of the day, I had to support my husband."
By Associated Press Writer Angus Shaw