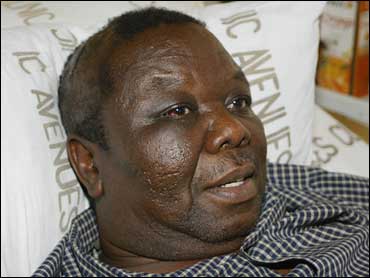 Police firing tear gas sealed off the headquarters of Zimbabwe's main opposition and arrested the party's leader Wednesday, according to the party and witnesses.

A statement from the Movement for Democratic Change said Morgan Tsvangirai and other party officials were arrested. Tsvangirai had been scheduled to give a press conference on the government's escalating violence and intimidation in recent days, the party said in a statement.

Tsvangirai was among about 50 opposition activists who were arrested, briefly held and allegedly beaten by police March 11 after a crackdown on a prayer meeting.

The European Union said it viewed the arrest of Tsvangirai with "great concern," said Jens Ploetner, a spokesman for the Foreign Ministry of EU president Germany.

"The EU president holds the leadership of Zimbabwe responsible for the bodily injury to Tsvangirai and calls for him to have immediate access to legal, and if necessary, medical consultation," Ploetner said.

The EU also demanded that the government respect human rights, as well as the nation's own laws in handling Tsvangirai.

President Robert Mugabe has vowed to crush opposition to his rule. The 83-year-old leader is to attend an emergency meeting of Southern African leaders in Tanzania Wednesday which is to focus on the political turmoil in Zimbabwe.