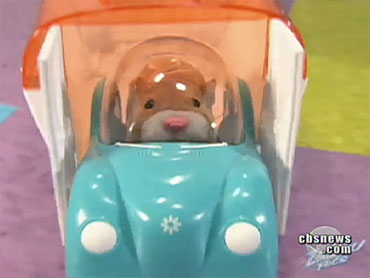 A consumer group in California says one of the hottest-selling toys this holiday season may not be safe for youngsters, reports CBS Station KPIX correspondent Kiet Do.

When it debuted, the Zhu Zhu pet hamster was one of the top 15 hottest toys of the holiday season.

But the consumer watchdog group Good Guide, based in the Bay Area, says that if you have one, keep the receipt.

In rating the product goodguide.com says it found a chemical called antimony, which is a metal with potential health hazards.

"If ingested in high enough levels [it] can lead to cancer, reproductive health, and other human health hazards," said Dara O'Rourke, an associate professor of environmental science at U.C.-Berkeley, and co-founder of goodguide.com.

On Saturday evening, the manufacturer of Zhu Zhu Pets, Cepia LLC, released a statement to CBS News responding to the Good Guide warning. In the statement, the company says that its hamster toys, named Mr. Squiggles, are "absolutely safe and has passed the most rigorous testing in the toy industry for consumer health and safety."

"We are disputing the findings of Good Guide, and we are 100 percent confident that Mr. Squiggles, and all other Zhu Zhu toys, are safe and compliant with all U.S. and European standards for consumer health and safety in toys," Cepia CEO Russ Hornsby said in the statement.

Good Guide partners with other companies to rate the social, environmental, and health impacts of hundreds of products, which includes testing toys like the Zhu Zhu pet for, among other things, toxic chemicals.

Good Guide says the Zhu Zhu stood out because of high levels of antimony.

"If these toys aren't even meeting the legal standards in the U.S. then I would say that it isn't worth the risk for me to bring it into my household," said O'Rourke.

Good Guide says the danger is when kids touch the toy, and then touch their mouth, or put the toy directly in their mouth.

"We're not recommending that you throw them away," O'Rourke said. "But if you're concerned about it then we recommend that you call the company or potentially return the product if you feel it's not safe enough for your kids.

The toy is made in China, but the company, Cepia llc, is headquartered in St. Louis.

KPIX tried to contact the company, but so far, our phone calls and e-mails have not been returned.

At the Toys R Us in San Mateo, parents say the risk isn't worth it: "That would certainly change my decision for getting it," said Diana Cordio of San Mateo, when told of Good Guide's findings.

Parent Patrick McKinney said, "As much as they may want it, I gotta side on the side of safety and they're gonna have to pass on it."