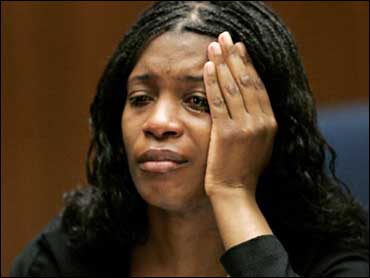 A woman who pleaded no contest to stalking and threatening Catherine Zeta-Jones was sentenced Friday to three years in state prison, but with credit for time served, she could be imprisoned for as little as seven months.

Dawnette Knight, 35, was given credit for 600 days served. Superior Court Judge David Mintz also ordered her to pay $200 in restitution.

Zeta-Jones, who won a 2003 supporting actress Oscar for her role in "Chicago," wasn't in court, but sent a letter that was read by prosecutor Debra Archuleta.

Calling Knight "evil," the actress told her: "You have profoundly affected me in how I conduct my life. ... Your actions will be with me the rest of my life — how I will be constantly observing, looking over my shoulder."

Knight pleaded with Mintz for leniency and apologized to Zeta-Jones, saying: "I hope one day the victim will forgive me. I am sorry. I think about it all the time."

Lawyer Richard Herman said his client received "a very kind sentence." Charged with one felony count of stalking and three felony counts of making criminal threats, she could have been sentenced to five years in prison.

Knight was accused of sending threatening and violent letters to acquaintances of the actress, including her agent and her husband, actor Michael Douglas.

One letter said: "We are going to slice her up like meat on a bone and feed her to the dogs." In another letter, Knight allegedly apologized, claiming she had been in love with Douglas.

Knight was originally charged with stalking and 24 counts of making criminal threats between Oct. 2, 2003, and May 21, 2004. Twenty-one of those counts were dismissed.