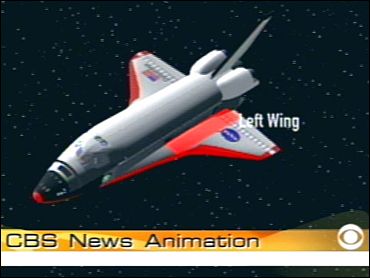 The Columbia investigation board is trying to zero in on what caused the hole in the shuttle's aluminum skin that apparently allowed super-hot gases to penetrate the wing and destroy the spacecraft.

On Thursday, the investigators said that a gash or some other kind of breach probably doomed the spacecraft.

The board is analyzing various possible causes for the breach. It has not ruled out the possibility, raised from the very start of the investigation, that the shuttle was damaged by a hard piece of foam insulation that fell off the big external fuel tank during liftoff.

Not even sabotage has been ruled out, investigation board chairman Adm. Harold Gehman Jr. said Friday.

"Any purposeful hindrance or damage is included in our investigation just like everything else," he said. "Everything is on the table."

George J. Gleghorn, a retired TRW Inc. engineer and former member of the NASA Aerospace Safety Advisory Panel, said it is unlikely a piece of debris or meteoroid struck Columbia during its 16-day mission without anyone noticing.

That leaves liftoff as the most likely time for a breach to have occurred, said Gleghorn, a space debris expert.

"I would be surprised if something happened that caused a breach of the skin without being noticed unless it was that incident that happened during the ascent phase," Gleghorn said.

Investigators believe the breach allowed a stream of superheated gases to penetrate the shuttle's left wing, starting a cascade of failures.

One by one, sensors embedded throughout Columbia's left wing began recording unusual readings as the shuttle approached the California coast on Feb. 1. Seven minutes after the first indication of a problem, Columbia broke up in the sky over Texas, killing its crew of seven.

Most ominous of the readings was a spike in temperature in the compartment containing Columbia's left landing gear that suggests gases 2,000 degrees or hotter had infiltrated the shuttle. To do so, they would have had to bypass the layer of tiles and other insulating material designed to protect the spacecraft from the searing heat of re-entry.

The investigation board has ruled out the possibility that a missing tile would have allowed heat to simply radiate into the interior of the wing and cause the rise in temperature. That leaves the theory that a breach of some kind allowed the gases, called plasma, to stream in directly.

The location of the sensors that gave unusual readings, as well as the nature and timing of the readings, should allow the investigation to reconstruct the chain of events.

On Friday, the board traveled from Kennedy Space Center at Cape Canaveral, Fla., to the Marshall Space Flight Center in Huntsville, Ala., where the members planned to learn more about the shuttle, including the tank insulation.

Gehman said he will add one or two authorities in high-altitude aerodynamics and thermal engineering to the nine-member board to bring more expertise to the investigation. The board will also conduct some key tests independently of NASA, he said.

"We're not going to double-check everything NASA does," Gehman said. "NASA is a great organization and we have no doubts about their competence. But when something bears directly on our report ... we will go out and get that technically and independently verified."

The board has been criticized by members of Congress and others as not being sufficiently independent of NASA.

Search crews continued to comb Texas and Louisiana for more debris from Columbia. Remains of all seven astronauts have been recovered. They are being analyzed for clues about Columbia's destruction, Gehman said.

NASA is also seeking more images of Columbia's re-entry, including any pictures taken from aboard ships that were between Hawaii and California on Feb. 1. It wants to stitch together photographs, videotapes and other information to reconstruct Columbia's final minutes.

Also on Friday, NASA released edited footage shot inside Mission Control during the disaster. It shows flight director Leroy Cain weeping as he directed his colleagues to ensure that rescue efforts were under way in the Dallas area.