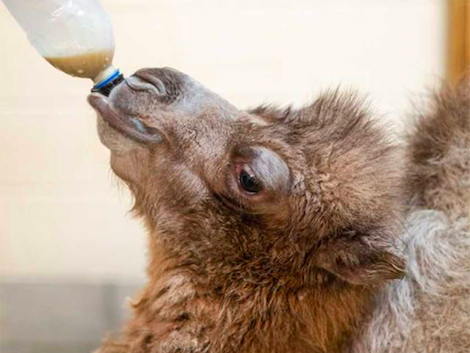 She was born on a Sunday, but every day is hump day for Zehra, a rare baby camel that became the most recent addition to the Toledo Zoo in Ohio. She is a Bactrial camel, which the International Union for Conservation of Nature reports has assessed as "critically endangered."

Zehra, was born weighing in at 64 pounds and standing about three feet tall, according to the Toledo Zoo. She is currently being bottle-fed and receiving blood and plasma transfusions to get her back on track after nursing complications with her first-time mother, Sasha.

Her bottle feedings will be open to the public at the end of June, the zoo said.

Less than two months later, Zehra weighs a whopping 150 pounds and stands over four feet tall. Toledo Zoo officials described the camel as "spunky and fun loving," living with her mother as she is slowly introduced to the rest of the herd.

Zehra's birth is a big deal beyond Ohio: She is the first of her subspecies, the Bactrian camel, to be born in captivity in recent history. Distinguished by their pair of humps as opposed to the more common single humped camel, the Bactrian camel faces an existential threat.

The Bactrian camel population is believed to be under 1,000 mature specimens with a projected population decline of "at least 80 percent within the next three generations," or 45 to 50 years. The species is threatened by herders and shepherds whose flocks compete with the species for resources, as well as hunters who target the species for sport.