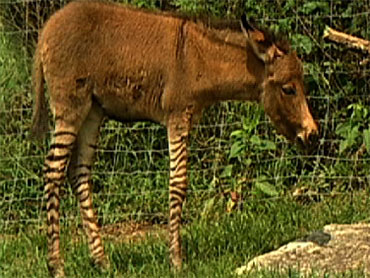 When you cross a horse and a donkey, you get a mule. But what about a zebra and a donkey?

One such animal is getting a lot of attention in Dahlonega, Ga.

C.W. Wathen, founder of the Chestatee Wildlife Preserve where the zedonk was born, told Bell when the little foal came out with striped legs, he couldn't believe it.

The newest American zedonk has been named Pippy, after the children's book character, Pippy Longstocking.

Born on July 21, the foal has drawn numerous fans -- some from as far away as France.

Many of the preserve visitors, anxious to see the zedonk, are children.

Hayley Wright, a 9-year-old visitor, said, "I thought it was cute but it was a little bit weird because I have never seen a half-donkey, half-zebra."

Though extremely rare in nature, Bell said, this equine combination of a zebra and a donkey are sometimes intentionally bred by humans. But according to Wathen, Pippy's birth was a complete surprise.

Wathen told Bell, "I never even thought about it. We run our zebras with our donkeys to keep them calmed down so they don't panic and run through fences. What really threw us off was when we had something with stripes on her legs."

In addition to her signature striped legs, Pippy has several behavioral characteristics of a zebra.

Wathen explained, "The sure part of the zebra in her is when she lays down, she is sitting on all fours, she's alert and ready to get up."

However, Pippy has a good bit of donkey traits, too.

Wathen said, ""She is so calm that's where the donkey comes in."

For more on the zedonk named Pippy, click on the video below.