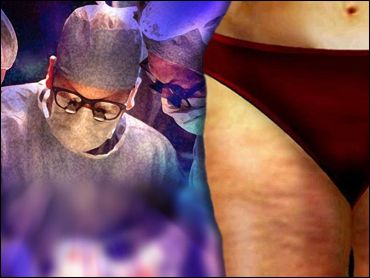 Want to get rid of those problem thighs over lunch? It sounds too good to be true, but non-surgical fat removal may be the next big thing in cosmetic procedures.

One experimental treatment, known as non-invasive body contouring, involves focused ultrasound waves that target that "impossible to diet away" fat found on the hips, thighs, and stomach. There is no incision, each session lasts about an hour, and patients can go right back to work after a treatment.

"There may be some moderate tingling, but patients don't find this to be painful," says Rod J. Rohrich, MD, former president of the American Society of Plastic Surgeons.

The treatment is one of several promising new non-surgical approaches for removing excess body fat that will be discussed in Chicago this week at the ASPS annual meeting Plastic Surgery 2005.

Pending FDA approval, non-invasive body contouring may be available in the U.S. within a year, Rohrich says.

Movies Too Loud For Kids?

The procedure is not for people who want to get rid of a lot of excess body fat. Instead, it is for those who have isolated areas of extra fat that are not helped by diet and exercise.

"It is not like liposuction, which can remove a great deal of fat," Rohrich says. "But it is perfect for patients who have no desire for surgery, but are looking for modest reductions in these problem areas."

Most patients need three or four one-hour treatments. During each session, ultrasound probes massage the skin, causing the fat cells beneath to rupture and die. The body then simply rids itself of the dead cells.

Rohrich characterizes the results seen in clinical trials in Israel and Europe as "very promising." A summary of several clinical studies will be presented this week at the Chicago meeting.

Other Ways To Avoid The Knife

St. Louis plastic surgeon Leroy Young, MD, agrees that the treatment is promising. But he says several other new, non-surgical approaches for fat removal are also on the horizon.

One of these, known as mesotherapy, is not really new at all. Instead of ultrasonic waves, mesotherapy relies on repeated injections just under the skin to kill fat cells further down.

The treatment has been used in France for decades, but clinical studies are just beginning in the U.S.

The drugs used in the injections are approved for other uses in the U.S. but have not been approved for fat removal.

Researchers are also working on a non-surgical laser procedure specifically marketed for the removal of cellulite.

Young, who chairs the ASPS task force on emerging trends in plastic surgery, says before-and-after pictures of patients who have had the procedure show dramatic improvements.

"Nothing else has ever worked for cellulite, so we'll see," he says.