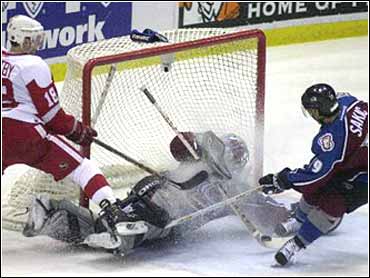 The Detroit Red Wings need to find a way to carry their regular-season success against the Colorado Avalanche into the playoffs.

Steve Yzerman scored his second goal of the game 1:08 into overtime as the Red Wings beat the Avalanche 4-3 Sunday night for their sixth victory in seven games against Colorado.

Chris Drury's goal with 11.5 seconds left in regulation tied it for the Avalanche, 0-2 against Detroit this season, and sent the game into overtime.

It was his first goal and first point in 19 games.

Things have been different the last two seasons as Colorado eliminated Detroit in the second round both times. It was a six-game series in 1999 and a five-game series last season.

"We had a lot of chances," said coach Scotty Bowman of the Red Wings, who had 37 shots. "We've played this team and not had as many chances. I wish it was in the playoffs. You need something like that in the playoffs."

While the intensity of Sunday night's game didn't match a postseason game, it topped just a regular January contest.

"It was pretty intense ...," Drury said. "But I've played in two sries against the Red Wings in my career. Nothing can compare to that."

On the winning goal, Yzerman stole the puck from Ray Bourque in the Avalanche zone, faked Patrick Roy to the ice and lifted a shot over the prone goalie.

"It's a game of mistakes, I made a mistake in overtime," Bourque said.

Yzerman, who also had an assist, didn't think the play would turn into a goal.

"I just kind of put my stick out there, hoping to deflect his (Bourque) pass," he said. "And I turned up ice. I really didn't think I had a chance to get to the net."

Both teams scored in the first period.

Steve Duchesne scored on a backhander from the slot 5:45 in to give the Red Wings a 1-0 lead. But the Avalanche tied it with 2:39 left in the period, thanks to a mistake by Detroit goalie Manny Legace.

The Avalanche took a 2-1 lead in the second period when Joe Sakic, the NHL's leader in points, scored a power-play goal at 8:24.