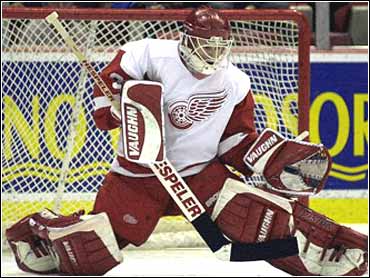 Steve Yzerman has saved the Detroit Red Wings many times in his 18 seasons, and he did it again in the closing seconds against Los Angeles.

Yzerman scored both Red Wings goal, the second with 4.3 seconds left in regulation, in a 2-1 victory Sunday night over the Kings.

His power-play goal gave Detroit a 1-0 lead at 8:33 of the third period, and it looked like that might be enough.

Chris Osgood, who has slumped most of the season, made a couple of spectacular saves late in the third period to protect the advantage.

But Todd Gill took a hooking penalty with 1:41 left and the Kings pulled goalie Steve Passmore for an extra attacker with 1:02 left.

With just 32 seconds left, Rob Blake one-timed a pass from Bryan Smolinski past Osgood from the left circle to tie it 1-1.

"What can you do?" asked Igor Larionov, playing his second game for Detroit since being reacquired from the Florida Panthers on Thursday. "Hockey is a 60-minute game. Great excitement. I hope the fans didn't go back to the parking lot. I hope they stayed."

If they did, they saw Larionov corral a bouncing puck just inside the Kings blue line with less than 10 seconds left, creating a 2-on-1 with Yzerman on his right.

Larionov got the puck to Yzerman, who cut in on Passmore and put one over the prone goaltender with just 4.3 seconds remaining.

"Once I saw the puck in the air, I took off," said Yzerman, who missed 25 games earlier in the season because of a knee injury. "I had the feeling that he (Larionov) would get control oit. I just headed for open ice.

"With him, you just have to find open ice, he'll find you."

The Kings found themselves with a tough loss.

"Detroit got the last chance and they took advantage of it," coach Andy Murray said. "It was a great play by three great players."

Larionov set up Yzerman, who has five goals this season, but it was up to the Detroit captain to finish it.

"He's a natural goal scorer," Larionov said. "Everybody remembers when he was scoring 50, 60 goals a year a few years ago. He works hard now, he's a good two-way player. But he's still a scorer. He's been doing it for 18 years."

Neither team threatened Osgood or Passmore in the first two periods as the Red Wings outshot the Kings 12-10.

But the action picked up in the third period as both teams had good chances in the first half of the period. Detroit's Brendan Shanahan came the closest to scoring when he hit the post from the slot with 14 minutes left.

His biggest stop was a pad save while lying on the ice on Eric Belanger's shot from the slot with 9:05 left.

"I pretty much just tried to get as much of my body as I could in front of it," Osgood said.