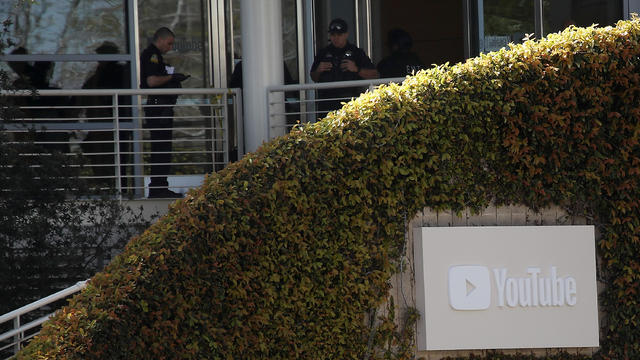 San Bruno police identified the suspect late Tuesday as Nasim Najafi Aghdam, 39. She was found dead at the scene from what authorities believe is a self-inflicted gunshot wound. Three people were transported to local hospitals with gunshot wounds.

Barberini said the motive appears to be that Aghdam was upset with the "policies and practices" of YouTube, but they are continuing to investigate. In several videos posted to the platform, Aghdam accused YouTube of censoring her and expressed anger to the company.

Barberini told reporters Aghdam went to a "local" gun range before the shooting, but didn't name the facility.  Aghdam legally purchased and owned the handgun with which she opened fire on a campus patio while workers were eating lunch, according to police.

Aghdam is believed to have accessed the building by a parking garage after parking her car at an adjacent business, Barberini said. Police are still working to determine the level of security in the location where she entered the campus.

The suspect's father, Ismail Aghdam, told CBS Los Angeles his daughter had gone missing for several days. On Monday, he called police to report his daughter missing after she did not answer the phone for two days and told officers that she might go to YouTube, he said.  She had told family members that she believed the company was suppressing her videos, which included segments about veganism, animal cruelty and exercise, along with glamour shots of herself.

He said police eventually found his daughter and said she was in a car in Mountain View, about 28 miles south of San Bruno.

When the family realized she was close to YouTube's headquarters, they told police she said the company was "ruining her life." He said police told the family they would keep an eye on her.

People who post on YouTube can receive money from advertisements that accompany their videos, but the company "de-monetizes" some channels for reasons including inappropriate material or having fewer than 1,000 subscribers.

Aghdam "hated" YouTube and was angry that the company stopped paying her for videos she posted, her father, Ismail Aghdam, told the Bay Area News Group.

San Bruno police said Wednesday they couldn't say what information was relayed to them from the Mountain View police department, who took that report.

Mountain View officers found her sleeping in her car in a parking lot around 2 a.m. Tuesday but let her go after she refused to answer their questions. Aghdam did not appear to be a threat to herself or others, police spokeswoman Katie Nelson said.

In social media posts on Wednesday, Mountain View police said that officers spoke to her family twice and at no time did her father or brother "mention anything about potential acts of violence" or the possibility that she would lash out because of the videos.

Throughout a 20-minute conversation with officers, she appeared calm and explained that she had decided to leave her home because of family issues and said nothing about YouTube, police said.

Earlier reports indicated  Aghdam may have known one of the victims, but police said late Tuesday that "at this time there is no evidence that the shooter knew the victims of this shooting or that individuals were specifically targeted."

Police say they received reports of gunshots and arrived two minutes after receiving the first call. One gunshot victim was found on the campus critically injured, and two were found at adjacent businesses, Barberini said.

Barberini confirmed Wednesday they found no links between Aghdam and any of the victims. Two women wounded in the attack were released Wednesday from a San Francisco hospital. The third victim, a 36-year-old man, was upgraded from critical to serious condition.

San Bruno is "no stranger to a crisis," said the mayor Rico Medina, and praised first responders who "ran into an active shooting situation as it occurred."

"No one goes to work thinking this is what will happen to them around their meal time, but it did," Medina said.