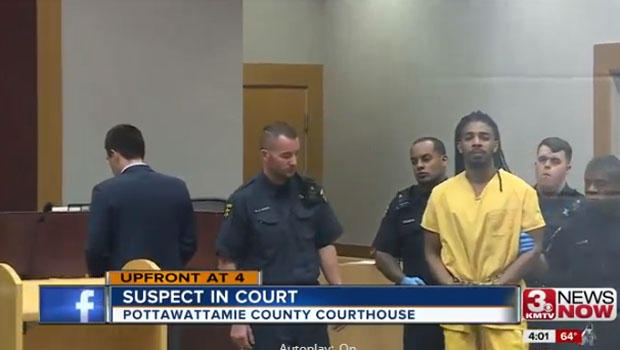 COUNCIL BLUFFS, Iowa -- A man who pleaded guilty to murder and 11 other counts for killing a western Iowa sheriff's deputy and wounding another during a May jail escape was sentenced Tuesday to life in prison without parole.

The sentence came after Wesley Correa-Carmenaty, 24, changed his pleas to guilty to first-degree murder, attempted murder, escape, kidnapping and other crimes. His trial had been set to begin Tuesday, but his attorney informed authorities last week that Correa-Carmenaty would change his plea in Pottawattamie County District Court in Council Bluffs.

Correa-Carmenaty, who used a Spanish interpreter, showed little emotion throughout the hearing, smiling and nodding as he entered pleas to each count.

Prosecutors noted that he was offered no plea agreement. Iowa has no death penalty.

The judge ordered Correa-Carmenaty's life sentence to be served after he finishes a 45-year sentence he received earlier this year for a separate murder. The judge also issued sentences totaling 175 years for other counts ranging from attempted murder and kidnapping to robbery and weapons counts related to the jail escape.

"The reason for the sentence is pretty simple -- to guarantee that the defendant will spend the rest of his life in prison," Judge James Heckerman said. "It's clear...that he's an extreme threat to society."

Correa-Carmenaty had just been sentenced on May 1 in the unrelated murder case and was being taken from the courthouse to the Pottawattamie County Jail when the fatal assault occurred, officials have said.

Authorities say Correa-Carmenaty was in handcuffs and leg shackles as he was being transported in a jail van, but managed to unlock them by the time the van reached the jail.

Pottawattamie County Attorney Matthew Wilber explained publicly for the first time during court Tuesday how exactly Correa-Carmenaty managed to escape. Wilber said Correa-Carmenaty unlocked his shackles by hiding a handcuff key obtained from another inmate in his hair. He was also armed with a handmade shank formed from a toothbrush, which he used to slash Deputy Mark Burbridge in the face, neck and arms during the attack, then managed to get into the cab of the van and grab a service weapon, shooting Burbridge in the head, then Deputy Pat Morgan in the abdomen once before the gun jammed, Wilber said. Burbridge died and Morgan survived.

Wilber said Correa-Carmenaty took both deputies' guns, ammunition and the keys to the van, then drove the transport van through a jail garage door, abandoning it a few blocks away. Authorities say he tried to carjack a truck using the gun, which he did not know how to operate, accidentally ejecting the weapon's 15-round clip. With one round left in the chamber, he shot and wounded a man inside the truck, which sped off. A few minutes later, he carjacked a woman and drove across the state border into Omaha, Nebraska, where he let her go. He was arrested there a short time later after crashing during a high-speed chase with police.

"But for an issue with the first gun he had and his inability to use the second, this could be a case where four, five or even more were killed," Wilber told the judge.

Three of Burbridge's children spoke at the hearing, each of them labeling Correa-Carmenaty "a monster," and fighting tears as they described their father as a loving parent.

Kelsey Brant, Burbridge's stepdaughter, openly cried as she described getting the frantic call from her mother the day Burbridge was shot.

"You're a monster," she said. "I know you have no remorse for anything you've done or the pain you've caused."

Correa-Carmenaty apologized to Burbridge's family, saying he had liked Burbridge.