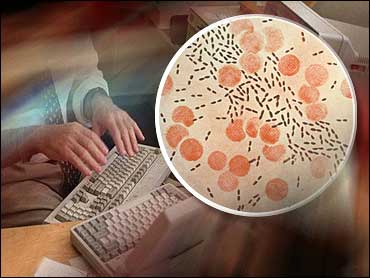 A new survey shows which office-based jobs host the most bacteria.

Here is the list, going from careers with the most to least germs on workspace surfaces:

University of Arizona microbiologist Charles Gerba, Ph.D., and colleagues did the dirty work. The Clorox Company funded the study and reported the results. These findings are part of a large research project by Gerba on "Germs in the Workplace."

Average bacteria per square inch of workspace surfaces ranged from 17,800 for teachers to 900 for lawyers, according to the report, which doesn't specify which bacteria were found.

Telephones are the workplace's top spots for bacteria, according to Gerba's team. Next are desks, computer keyboards and computer mice.

Many office workers eat at their desks, munching on lunch or snacking as they churn through their chores. That habit may be convenient, but it can be a bacteria magnet.

"Desks are really bacteria cafeterias," Gerba says, in the news release. "They're breakfast buffets, lunch tables, and snack bars as we spend more and more hours at the office."

Still, Gerba's team found fewer bacteria in offices than they had in past studies. "We were pleased to find a decrease in bacteria levels," Gerba says in a news release. "Perhaps people are becoming more aware of germs in their office and doing something about it."

Results from previous research from "Germs in the Workplace" found that when disinfecting wipes are used as directed, up to 99.9 percent of germs are eliminated.

The researchers visited workers' offices, swabbing desks, phones, and computers for bacteria. They sampled an average of 11 cubicles or offices at each location, for a total of 616 surfaces.

Workers were told not to tidy up in advance. "In fact, they were asked not to alter their regular workday routines, from eating at their desks to cleaning," the report states.

There were some differences among the offices Gerba's team toured: