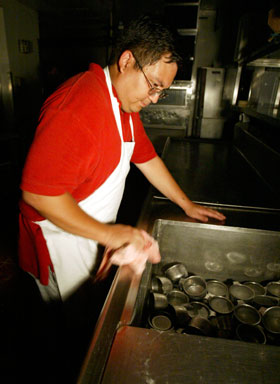 Steve Young restructured his contract with the San Francisco 49ers on Thursday as part of a series of moves to bring the team into compliance with the salary cap.

The 49ers gained $3 million in cap relief by reworking the contract of Young, the two-time league MVP who missed the final 13 games of last season after a hard hit left him with his fourth concussion in three years.

"Steve was anxious to do this because the 49ers have been great to him over the years and he wanted to return the favor," said his agent, Leigh Steinberg.

The 49ers have slashed about $22 million from their bloated payroll over the last three weeks to come in about $3 1-2 million under the $62.2 million cap for the 2000 season before Thursday's deadline.

San Francisco saved about $6 million through the release of 12 players, including former Pro Bowlers Tim McDonald and Lee Woodall, and the retirements of defensive end Charles Haley and fullback Tommy Vardell.

"It's been a lot of hard work, planning and researching," general manager Bill Walsh said. "We will miss the players who are gone and appreciate that many others have stepped forward and were willing to restructure their contracts. As we have said before, for us to get full control of our salay cap situation, it is going to be a three- or four-year process."

Young's new deal runs through 2003 and dropped his cap figure for the upcoming season from $8.1 million to $5.1 million, according to Steinberg.

Young would receive a base salary of $2.25 million, a reporting bonus of $900,000 and $4 million in incentives. The contract calls for $10 million in each of its final three years.

Despite the new contract, Young still has not decided whether he'll play or retire. Steinberg said Young is preoccupied now with wedding plans he's scheduled to get married in mid-March.

"We have told the 49ers Steve will be in a decision-making mode later but that right now he's emphasizing other areas of his life," Steinberg said.

Steinberg did say that Young has passed a battery of neurological test and they don't anticipate any problems getting medical clearance to play.

"He certainly will be medically cleared," Steinberg said. "But the choice will be his whether or not to play. He still has a huge desire to play. It's just a matter of weighing the risks."

And the decision to play would be followed "by some serious fact-finding as to rebuilding plans for the 49ers and their plans to protect him," added Steinberg.

There has been speculation that Young may opt to resume playing but go elsewhere, perhaps Seattle or Denver, to finish his career rather than remain in San Francisco, in the midst of an overhaul after a 4-12 season.