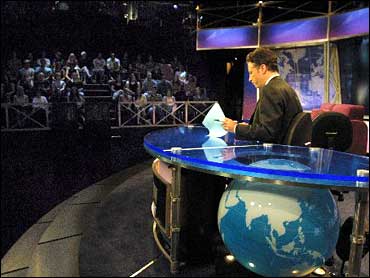 Readers over 30 might scoff at Stewart's inclusion - assuming they know who he is. For many under 30, the host of Comedy Central's "The Daily Show" is, improbably, a source for news.

A poll released earlier this year by the Pew Research Center for the People and the Press found that 21 percent of people aged 18 to 29 cited "The Daily Show" and "Saturday Night Live" as a place where they regularly learned presidential campaign news.

By contrast, 23 percent of the young people mentioned ABC, CBS or NBC's nightly news broadcasts as a source.

Even more startling is the change from just four years ago. When the same question was asked in 2000, Pew found only 9 percent of young people pointing to the comedy shows and 39 percent to the network news shows.

The people at "The Daily Show" ridicule the idea of people looking to their show as a primary news source.

"A lot of them are probably high," Stewart cracked. "I'm not sure, coming off of robots fighting and into our show, what we're dealing with out there."

Random conversations with nine people, aged 19 to 26, waiting to see a taping of "The Daily Show" last week revealed two who admitted they learned much about the news from the program.

None said they regularly watched the network evening news shows.

"I'm not really interested," said Michelle Cohen, a 20-year-old New Yorker. "A lot of those shows focus on topics that have absolutely nothing to do with me, like old people's health care."

As if to drive the Pew survey's point home, "The Daily Show" reached a ratings milestone during the two weeks of the Iowa caucus, New Hampshire primary and State of the Union address. For the first time, Stewart's show had more male viewers aged 18 to 34 than any of the network evening news shows.

One newspaper, Newsday, has Stewart listed atop a list of the 20 media players who will most influence the upcoming campaign. Tim Russert, Ted Koppel, Sean Hannity, among others, trailed.

Stewart's success at skewering news people, and not just newsmakers, has particularly scored with his audience.

"They poke fun at how cheesy the regular news shows are, and somebody needs to do that," said Joe Van Vleet, a 25-year-old Californian attending college in New York City. He mimicked a news anchor's voice and marveled at how they all sound the same.

Stewart, she said, "keeps it very truthful and straightforward."

Hold on there, said Ben Karlin, the show's executive producer. A "Daily Show" viewer who doesn't supplement it with real news isn't very well-informed, he said. Pew confirmed that; its survey showed that people who regularly learned news from the comedy shows were less likely to know basic facts of the campaign.

Evening news producers have long recognized their audience is older; the common theory is that when people get jobs, mortgages and children, they'll take a greater interest in their programs.

The worry is that with so many other sources of news available now, young people will become accustomed to them and not make the evening news a priority.

Steve Capus, "NBC Nightly News" executive producer, said he had a sense that more young viewers were watching right after the 2001 terrorist attacks. Now, he's not so sure.

The challenge is to get young viewers more consistently, not simply when there are monumental stories, he said.

Murphy said he's constantly trying to keep up with new technology and trends in how people get news. Ultimately, he said, you simply have to make the best newscast you can.

Vernon's companion at "The Daily Show" taping, 25-year-old graduate student Yvgeni Sverdlov, may be a typical young news consumer. He said he absorbed news from various sources - a little bit of CNN, a newspaper, even reading news tickers while walking in Manhattan.

Both Stewart and the evening news anchors essentially have the same goal: to take the daily flood of news and distill it for a viewer. Brokaw does it seriously, Stewart looks for laughs.

Which one is a 21-year-old most likely to watch?

In Capus' Rockefeller Center office, the "Nightly News" staff often gathers after its morning news meeting to watch the 10 a.m. rerun of the previous night's "The Daily Show."

Stewart, in turn, knows their world intimately. In conversation, he drops the name of "The Note," ABC News' Web site for political junkies.

NBC invited Stewart to give commentary after President Bush's State of the Union address in January. CBS' evening news ran a weekly segment during the 2000 campaign on what comedians were saying, and it's returning this year.

The danger, one Capus and Murphy readily recognize, lies in network news programs that overreact to the comedy shows' growing influence by obviously groping for ways to connect with young people.

Stewart knows when he sees a news magazine correspondent in a leather jacket standing on a dark street to introduce a story about washing machines that he has a joke that needs no punch line.

"I shudder to think of Dan Rather up there trying to riff like Jon Stewart," said Rob Vincent, 26, an Oklahoma City native attending law school in New York. "That seems a little scary to me."

"It would alienate their core audience - which is my parents and grandparents," he said.

Comedy Central and CBSNews.com are both owned by Viacom, Inc.