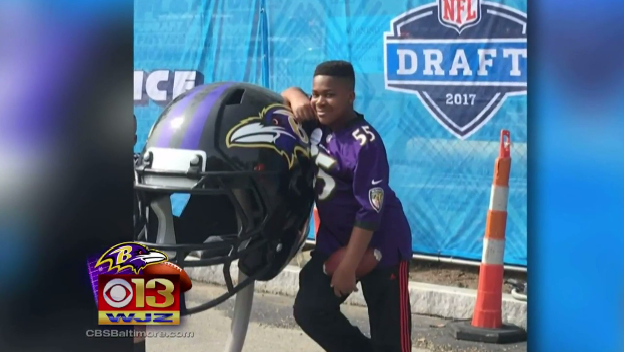 The eighth grader -- who was diagnosed with brain cancer two years ago -- recently told Make-A-Wish Mid-Atlantic that he longed to join Goodell at the podium in Philadelphia when the Ravens, his favorite team, made their first-round selection.

When his wish was presented to the team's front office, Coach John Harbaug happily complied and informed Owuanibe that his wish has been granted.

And so, when Baltimore decided to take Alabama cornerback Marlon Humphrey with the 16th overall pick, Owuanibe jumped into action to help complete the process. Wearing a grey suit, a bowtie, a light blue shirt and a very serious expression, Owuanibe nervously stood next to Goodell, who shared the youth's background with a national audience.

The Baltimore teenager stood stoically until Goodell said, "He loves the Ravens," and then the boy finally smiled.

An instant after that, Goodell stepped aside and let Owuanibe move behind the microphone. He pumped his fist and told football fans around the world who the Ravens picked at No. 16.

Owuanibe says he loved the Ravens long before he was diagnosed with cancer. In fact, the teenager met with the coaching staff and several players at training camp through another nonprofit organization, the Casey Cares Foundation, in recent years.

His cancer is now in remission.