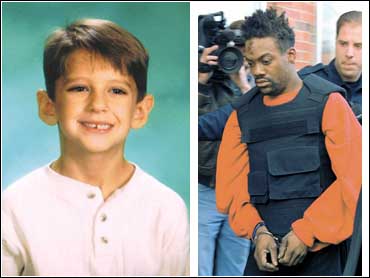 A six-year-old child was dragged for about four miles when his mother's car was carjacked Tuesday, reports CBS affiliate KCTV.

Motorists watched in horror as the stolen vehicle sped down a highway, dragging to death the little boy who was entangled in a seat belt outside one of the doors.

Six-year-old Jake D. Robel of Blue Springs died Tuesday before the driver of the Chevrolet Blazer could be stopped by pursuing motorists. Witnesses said the chase reached speeds of 80 mph.

"Witnesses stated that they heard the juvenile victim screaming for his mother to help him," Detective Michael Skaggs said in a statement Wednesday.

"He came flying around us and we saw the kid hanging out the side of the car bouncing," said Fred Byam, who chased the Blazer. "I was honking my horn and flashing my lights."

Police said Davis took the vehicle when Jake's mother left it running while she went inside a sandwich shop. The man tried to shove the boy out of the car, and "probably thought he'd gotten the kid out, because then he took off," Sgt. Gregg Wilkinson said.

Mother Christy Robel opened the back door to try to get her son out, the police statement said. At that point, the driver looked over his shoulder and in the rear of the vehicle.

"As he was fleeing the area, the victim was trapped against the vehicle by the seat belt as the rear door had closed, making it impossible for him to get away from the vehicle," Skaggs said in the statement.

Prosecutor Robert Beaird would not comment Wednesday about whether the man knew the child was being dragged. Asked if the murder charge might be upgraded to a first-degree charge, he said the case would be reviewed for the grand jury to determine if the evidence rises to that level.

Beaird fought back tears when he told about talking to the child's family just before his news conference. "It's pretty hard to talk to the family," he said, stopping to regain control.

Sharon Irwin watched as the suspect drove off in the stolen car.

"I turned my head and seen something dragging along the righthand side of the car," she said. "People was honking and hollering at him to stop and he just kept going."

The chase finally was stopped when motorists in two trucks and a car surrounded the 1991 Blazer at a stoplight.

The man got out of the stolen vehicle, saw the boy's body and mumbled "something like `I didn't do that,'" said Brad Byam, one of two brothers who pursued the Blazer in their truck.

Witnesses said the motorists wrestled the man to the ground and waited for police to arrive; they also tied the man's legs with a rope.

Beaird said the people who stopped the vehicle are seen as heroes. "They saw something that had to be stopped and they stopped it," he said.

An 11-year-old boy from one of the pursuing vehicles later took a blanket and placed it over the victim, whose clothes had been mostly torn off.

Wednesday, a four-foot cross with flowers and a stuffed baby lamb stood at the corner where the chase ended.