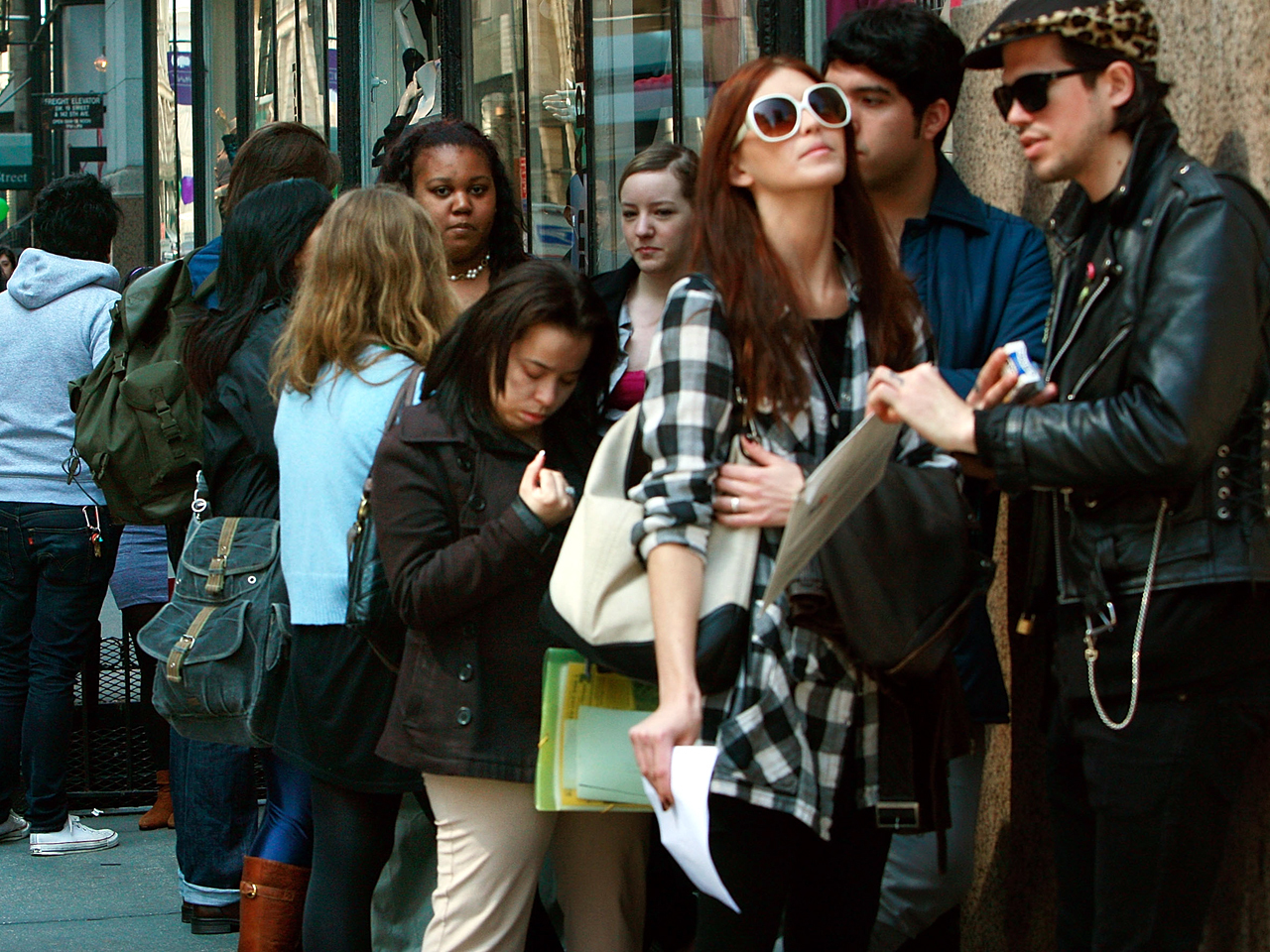 In record-setting numbers, young adults struggling to find work are shunning long-distance moves to live with Mom and Dad, delaying marriage and buying fewer homes, often raising kids out of wedlock. They suffer from the highest unemployment since World War II and risk living in poverty more than others — nearly 1 in 5.

New 2010 census data released Thursday show the wrenching impact of a recession that officially ended in mid-2009. It highlights the missed opportunities and dim prospects for a generation of mostly 20-somethings and 30-somethings coming of age in a prolonged slump with high unemployment.

"We have a monster jobs problem, and young people are the biggest losers," said Andrew Sum, an economist and director of the Center for Labor Market Studies at Northeastern University. He noted that for recent college grads now getting by with waitressing, bartending and odd jobs, they will have to compete with new graduates for entry-level career positions when the job market eventually does improve.

"Their really high levels of underemployment and unemployment will haunt young people for at least another decade," Sum said.

Richard Freeman, an economist at Harvard University, added, "These people will be scarred, and they will be called the 'lost generation' — in that their careers would not be the same way if we had avoided this economic disaster."

Beyond the economy's impact, the new figures also show a rebound in the foreign-born population to 40 million, or 12.9 percent, the highest share since 1920. The 1.4 million increase from 2009 was the biggest since the mid-decade housing boom and could fuel debate in this election season about U.S. immigration strategy.

Most immigrants continue to be low-skilled workers from Latin America, with growing numbers from Asia also arriving on the bet that U.S. jobs await. An estimated 11.2 million immigrants are here illegally.

Seniors 65 and older tended to return to or stay put in their jobs, accounting for the few U.S. employment gains in recent months. About 1 in 6 older Americans is now in the labor force — the highest level since the 1960s, before more generous Social Security and Medicare benefits made it more attractive to retire.

Nationwide, employment among young adults 16-29 stood at 55.3 percent, down from 67.3 percent in 2000 and the lowest since the end of World War II. Young males who lacked a college degree — typically black and Hispanic — were most likely to lose jobs due to reduced demand for blue-collar jobs in construction, manufacturing and transportation during the downturn. Among teens, employment was less than 30 percent.

(Earlier this year, CBS' "60 Minutes" broadcast a report on the legal but controversial practice of employing children to work on America's fields.)

In all, the employment-to-population ratio for all age groups from 2007-2010 dropped faster than for any similar period since the government began tracking the data in 1948. In the past year, 43 of the 50 largest U.S. metropolitan areas continued to post declines in employment, led by Charlotte, N.C., Jacksonville, Fla., Las Vegas, Phoenix, Los Angeles and Detroit, all cities experiencing a severe housing bust, budget deficits or meltdowns in industries such as banking or manufacturing.

Without work, young adults aren't starting careers and lives in new cities, instead hanging out with their parents.

Among adults 18-34, the share of long-distance moves across state lines fell last year to roughly 3.2 million people, or 4.4 percent, the lowest level since World War II. For college graduates, who historically are more likely to relocate out of state, long-distance moves dipped to 2.4 percent.

Opting to stay put, roughly 5.9 million Americans 25-34 last year lived with their parents, an increase of 25 percent from before the recession. Driven by a record 1 in 5 young men who doubled up in households, men are now nearly twice as likely as women to live with their parents.

Homeownership declined for a fourth consecutive year, to 65.4 percent, following a peak of 67.3 percent in 2006.

"Many young adults are essentially postponing adulthood and all of the family responsibilities and extra costs that go along with it," said Mark Mather, an associate vice president at the private Population Reference Bureau. He described a shift toward a new U.S. norm — commonly seen in Europe — in which more people wait until their 30s to leave the parental nest.

"Some of these changes started before the recession but now they are accelerating, with effects on families that could be long term," Mather said.In all, the District of Columbia plus 14 states had the largest ratios of college graduates to high-school dropouts — more than 3 to 1. Several of these places, including the District of Columbia and states with larger immigrant populations, also had the widest income gaps between rich and poor.

The number of Hispanic children in poverty rose by half a million to 6.1 million last year, led by California, New Mexico, Texas, Arizona and Nevada, making up a majority of the increase in total child poverty. Hispanics now comprise 37 percent of children in poverty, compared with 30 percent for whites and 27 percent for blacks.

"We are really at a crossroads," said William H. Frey, a demographer at the Brookings Institution. "These new young immigrants and their children need a pathway to the middle class — good educations, affordable housing and jobs — at the same time federal and state budgets are strapped for funds. While we face tough choices, the quality of our future labor force depends on meeting their needs."