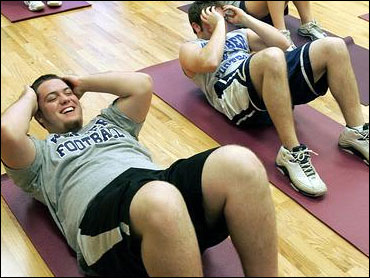 Young athletes are at risk of engaging in unhealthy efforts to lose or gain weight and doctors need to give them guidance and "put pressure" on coaches to do the same, the American Academy of Pediatrics says.

In a detailed policy statement, the academy stresses that losing or gaining more than roughly one or two pounds weekly is dangerous.

"Weight loss accompanied by overexercising, using rubber suits, steam baths, or saunas" should be prohibited for all young athletes, the policy says. So should diet pills, nutritional supplements and diuretics, and no weight-loss plan for athletic purposes should ever be used before the ninth grade, the policy says.

The new stance was prompted partly by the 1998 deaths of three college wrestlers using strenuous workouts to lose weight and upcoming weight control requirements for student athletes from the National Federation of State High School Associations.

It applies to youngsters in sports where leanness or strength is emphasized, including bodybuilding, gymnastics, figure skating, football and cheerleading.

These are sports in which coaches may encourage unhealthy weight management practices that can lead to problems including eating disorders, dehydration, heat stress and gaining too much fat instead of muscle, which can lead to cardiovascular problems, the policy authors said.

Doctors need to "put pressure on coaches to do it right," said Dr. Thomas Martin, lead author of the academy's policy and a sports medicine specialist in Williamsport, Pa.

He called the policy an important step to raise doctors' awareness.

The policy is published in December's Pediatrics, for release Monday. It updates the academy's 1996 policy on promoting healthy weight control practices in young athletes.

The problem is "multifactorial," said Dr. Eric Small, chairman of the academy's council on sports medicine and fitness and a sports medicine specialist at Mount Sinai School of Medicine in New York.

The policy's guidelines for allowable weekly weight gain and loss parallel requirements for wrestlers from the National Federation of State High School Associations that take effect in the 2006-07 school year, Almquist said. Those requirements include mandating body-fat minimums of 7 percent for boys and 12 percent for girls, he said.

The academy has a similar body fat percentage recommendation for high school boy athletes but does not specify a minimum for girls, saying that they should consume enough calories to avoid menstrual abnormalities that can occur with too much loss of body fat.

The academy's policy also discourages doctors from using body-mass index measurements to gauge student athletes' fitness levels. BMI is a weight-height ratio but can be an inaccurate fitness measure for youngsters undergoing growth spurts and in athletes with muscular builds, the academy said.