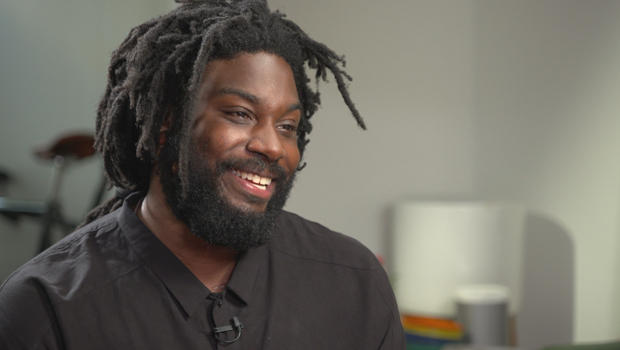 New York Times bestselling author Jason Reynolds says he never got straight A's in school. In fact, he didn't read his first novel until he was 17 years old.

Reynolds, the author behind a string of books for young adults, says he writes stories on topics he felt didn't exist when he was growing up.

"Writing is like any other sort of sport," Reynolds told "CBS This Morning" co-anchor Gayle King. "In order for you to get better at it, you have to exercise the muscle."

His new book, "Long Way Down," is about a young boy whose brother is killed by gun violence. (It's published by Atheneum, an imprint of Simon & Schuster, a division of CBS.)

When Reynolds was a student at Barnaby Manor Elementary School, in Oxon Hill, Md., he may not have guessed he would become an award-winning author for young adults.

King asked, "What would the teachers say about you back then?"

"Back then, the teachers said two things: one, that I was one of the most disorganized kids that they'd ever seen," he replied. "And two, that I didn't work to my full potential."

Her son's potential is not something Isabel Reynolds -- who teaches there now -- has ever questioned. "As a little boy growing up, it was important for him to know that he could do anything," she said. "He held the power to do anything."

"I taught that to him, and every night when he said his prayers, that was the last statement that he made: 'I can do anything,'" she added.

Reynolds admitted that he didn't read his first novel from cover to cover until he was 17. "I don't know whether to be mad or impressed by that," said King.

"Rap music," he said. "Rap music was and is, for me, everything. It's interesting, because I recognize that it's complicated, and it was complicated back then. I remember the protesting against the language of the artists and these songs. But for me, they were honest. And so rap music was the thing that really drew me in, specifically Queen Latifah -- the great Queen Latifah."

"Her image was something I directly connected to, because Queen Latifah reminded me of my mother, of my sister, of my cousins, of my aunties, because she was a woman with such stature," Reynolds added. "The way that she spoke was a little hard-edged. And she looked like she could give you the greatest hug of your life, and she looked like she could bust you in the face at the same time."

When asked what Queen Latifah's lyrics taught him, Reynolds said, "There was a direct connection between what she was doing with lyrics and what the poets that I was learning in school were doing with lyrics. That the only separation between these poets -- which we didn't even call rappers back then -- is generation. But the truth is, is that Queen Latifah's 'Ladies First,' [and] Maya Angelou's 'Phenomenal Woman' are literally the same poem, a generation apart."

Reynolds was so inspired by their words, he became a poet, but for years struggled to find his place in the literary world until, he says, a friend changed his life.

"His name is Christopher Myers. His father was the late, great Walter Dean Myers," said Reynolds. "A juggernaut in our industry. He changed the way we thought about children's literature.

Reynolds embraced the task, writing eight novels in only three years. His latest release is titled "Long Way Down."

It's a story of a 15-year-old boy whose brother is killed, who gets on an elevator with a gun intent to take revenge on the person who killed his brother.

As the elevator doors open, on every single floor, others get onto the elevator with him – people who are no longer alive. "They are people that he knows, but they have all been murdered," Reynolds said.

From "Long Way Down":

Connecting with young people is a personal responsibility for Reynolds. Today, he has visited over 100 schools around the country.

"That excellence is a habit," Reynolds laughed. "All that matters to you is, are you going to do it or are you not? And if you're not, stop talking about it."

"Long Way Down" by Jason Reynolds (Atheneum) is available via Amazon.

Carole Hopson's journey to the cockpit