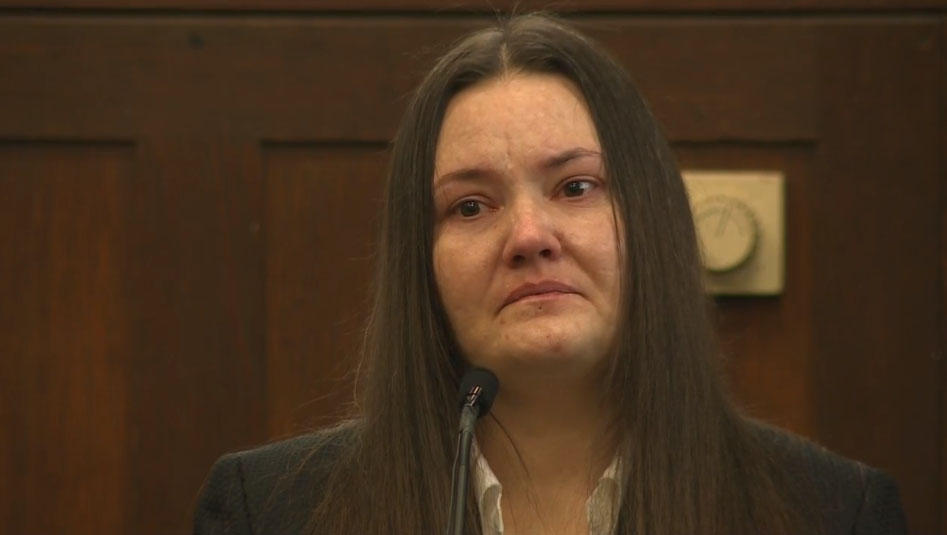 BOSTON -- The mother of a 2-year-old girl known as "Baby Doe" after her body washed up on a Boston Harbor beach has testified she saw her ex-boyfriend kill the girl.

Rachelle Bond told jurors during his murder trial Friday that Michael McCarthy punched her daughter, Bella, in the abdomen so hard that she bounced off a bed. Bond pleaded guilty to being an accessory after the fact for helping McCarthy dispose of her daughter's body, and is the prosecution's star witness.

After McCarthy allegedly dumped the two-year-old child's remains in a duffel bag off the waters of South Boston, Rachelle Bond said she told him, "You killed my kid."

She said McCarthy replied, "It was her time to die. She was a demon."

A composite image of "Baby Doe" was shared by millions on social media after her body was found on Deer Island in June 2015. The child wasn't identified as Bella Bond until three months later, when Rachelle Bond told McCarthy's friend she had seen McCarthy kill the child, and the friend notified police. The friend, Michael Sprinsky, testified this week that McCarthy was into "a lot of dark stuff."

Prosecutors say Rachelle Bond didn't tell anyone sooner because McCarthy had threatened to kill her and she was afraid of him.

She also admitted in court that she has a history of prostitution and arrests, and lost custody of two other children due to neglect. She said she was homeless when she met Bella's father in an Occupy Boston camp in 2013.

When she later learned she was pregnant, "I was ecstatic," Bond said, tearing up.

When asked why, she replied, "She was awesome."

Bond broke down several times during her testimony, recalling her daughter as a girl who loved books, being picked up and a "good eater" who enjoyed lobster bisque, homemade pasta sauce, baked beans and chili.

After losing touch with Bella Bond's father, Joe Amoroso, Bond said she lived in several Boston-area family shelters before receiving a housing voucher, and moved into an apartment with the help of a rent subsidy. She described taking prescription medication -- sometimes selling it for extra cash -- as well as street drugs like heroin. But she said she felt it didn't affect her ability to parent Bella.

Bond said Michael McCarthy first moved in with them in early 2015 after he texted her looking for drugs, and wound up staying on in the apartment because it was a bad winter and he had no other place to go. She said McCarthy was intelligent and interested in astrology, reiki, meditation and "conspiracy theories."  She said he believed in "evil spirits" and once lit sage in her apartment to ward off negative energy.

Bond said McCarthy was at first "playful and attentive" with Bella, but soon became distant towards the child. She said McCarthy felt Bond should discipline the child more. She recalled one night several weeks after McCarthy first moved in when she said the man locked the girl in the closet while Bond was in the bathroom.

"When I came out I heard her yelling, screaming, whatever, and he was outside the closet in my bedroom," Bond said. "I asked him why he did that, and he said, 'She was being fresh.'"

Bond said she couldn't recall the exact day that Bella was killed, but said it was a day in early June 2015, around 11 p.m. at night. She said she had been trying for several days prior to get Bella to sleep in her own room, which was difficult because the child liked to sleep with her. She said the girl came out of her bedroom several times, and each time, Bond had brought her back in.

She and McCarthy were watching a movie when they heard the girl playing in her room. McCarthy told her, "I'll go tell her to lie down,'" Bond said.

After about five minutes, Bond said went to go check to see whether Bella was asleep, and she said she saw McCarthy punching the girl in the abdomen. The child wasn't moving.

"'What the [expletive] did you do?'" she said she yelled at McCarthy. "He just kind of looked at me."

She said Bella's head was swollen and her face was gray, but she didn't see injuries or blood. She tried CPR, but couldn't resuscitate her. She said she picked the child up to try to leave, but McCarthy grabbed her by the throat and threatened her.

She described feeling dizzy and sick, passing out several times, and McCarthy injecting her in her neck with heroin.

She said McCarthy later put the girl's remains in a duffel bag and she got in the car with him. She saw "old free weights" in the backseat, she said, before McCarthy hit her and she became unconscious.

When she roused, the car was parked somewhere near the water. McCarthy was gone, she said, and the bag wasn't in the backseat.

She told the jury she didn't attempt to leave McCarthy because she "felt pretty trapped."

Prosecutors said they will recommend a sentence of time served and two years probation on Bond's accessory after the fact conviction after she testifies against McCarthy. The judge, who is overseeing both cases, said Bond's sentence would not be imposed until the conclusion of McCarthy's trial, reported CBS Boston.

Bond's attorney Janice Bassil has said Bella was "everything to her" and she wants nothing more than to see McCarthy convicted of murder, the station reports.

"I do see her as a victim in this case," Bassil said of Rachelle Bond.

Before Bond took the stand Friday, the judge cautioned the jury that because of the plea agreement, "you should examine the witness' credibility with particular care, and decide whether this witness' testimony is affected by her interest in the outcome of this case."

"The government does not know whether the witness is telling the truth," the judge said. "That's up to you to decide."