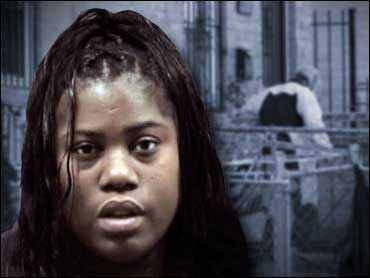 WASHINGTON (AP) A woman accused of killing her four daughters told police in an interview that the girls were possessed by demons and that she got rid of most of the family's possessions to contain the evil spirits.

A District of Columbia Superior Court judge spent a second day Tuesday reviewing a recording of a police interrogation of Banita Jacks. The decomposing bodies of Jacks' daughters — ages 5 to 17 — were discovered in January 2008 when U.S. Marshals came to evict her from her southeast Washington home.

Judge Frederick H. Weisberg was to decide whether to admit the interview as evidence in her trial, which had been scheduled to start this week. Jacks' attorneys filed a motion to exclude it.

Weisberg will decide the case instead of a jury at Jacks' request. He is expected to finish reviewing the tapes Wednesday. Jacks has chosen not to remain in the courtroom while the judge watches the interview.

Jacks' lawyers have urged Jacks to use an insanity defense, but she has refused. Weisberg has found her competent to stand trial.

In the videotaped interview, Jacks said the girls stopped being her daughters and took on the identities of the demons.

"I had to look at what they had become," Jacks said on tape. "They got so bad."

She said her eldest daughter, Brittany, was possessed by a demon she called "Jezebel," a prostitute who caused suffering and spread disease.

"She was that person; she was Jezebel," Jacks said on the recording. "With demon possession, you are a demon, period."

Jacks said there were times when Brittany would physically attack her and she had to fight back. She said some of her younger daughters made horrible "screeching" noises and caused other problems.

Authorities have said Brittany was stabbed to death, while the others were strangled.

Jacks said the demons clung to her possessions, so she had to get rid of them to purge the demons from the house. She threw out furniture and children's clothes, which she said continued to smell contaminated even after washing them.

But Jacks said she had nothing to do with the girls' deaths. She told detectives that her daughters inexplicably died one by one in their sleep. "It wasn't me," she said. "I'm not a liar."

Jacks described reading passages from the Bible that provided her clues about what would happen to her family. She also characterized her husband, who died from cancer and was the father of the younger two girls, as Jesus, saying he was resurrected and that she felt his spirit.

"You keep saying he's deceased," she said to detectives. "He's not."

Jacks said at some point she too was under the influence of demons.

Through her husband, she said, she learned that the girls were afflicted with demons, but that they also could be resurrected.

As each of the girls died, it appeared they finally became separated from the demons, she said.

When police questioned her about blood they found in Brittany's room, Jacks insisted there was none.

Police detectives used varying lines of questioning to ask how her daughters died, but Jacks stood by her account. She spoke in a faint voice during the interview, at times rambling or pausing. At one point, when detectives asked what she would say if the medical examiner determined Brittany had died of stab wounds, she replied that she would rather consult a lawyer before answering. However, she continued to talk about other aspects of her life.

Later, after the autopsy report came in, detectives asked Jacks why her account didn't match the finding that the girls were killed. She repeated a phrase she used many times during the interview: "None of this makes any sense."

"This whole story is wild," she added.

Jacks became emotional while viewing photos of her daughters and husband that detectives put before her. She said she could "never hurt a child in my life."

"I didn't appreciate you all saying that I didn't love my kids," she said.