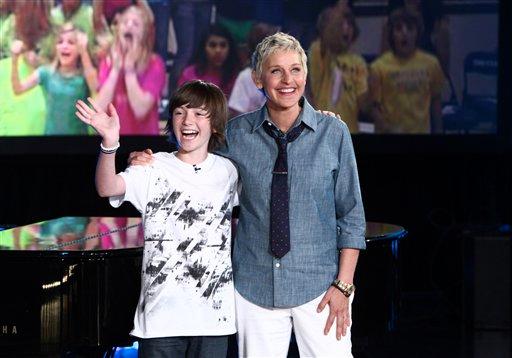 Yoko Ono will unveil the Imagine Peace Tower in Reykjavik, Iceland, on Oct. 9, which would have been John Lennon's 67th birthday.

Lennon, her late husband, was shot and killed outside their New York City apartment by deranged fan Mark David Chapman on Dec. 8, 1980.

"This is something that we spoke about 40 years ago," Ono told The Associated Press by phone this week before heading for Iceland. "Our dream is finally coming true."

The Imagine Peace Tower is a stories-tall beam of light that will emanate from a wishing well bearing the words "imagine peace" in 24 languages.

The tower will be lit each year from Oct. 9 to Dec. 8, "so it has the feeling of the shortness of life, but the light is eternal," Ono said.

Ono, 74, came up with the concept for the light tower in 1965. Lennon was interested, she said.

"He was visualizing then that it would probably become a reality one day," she said.

When she turned 70, Ono decided she needed a place to keep the thousands of wishes she had collected through the "wish trees" she had set up at gallery shows around the world.

"I was collecting the wishes for world peace, of course," she said. "I thought: 'I have to put them in a tower or something ... a peace tower.' "

With that, she set out to make her conceptual light sculpture a reality. Engineers from Iceland and Japan worked from her design to build a 55-foot platform beneath a 6 1/2-foot-tall wishing well that houses nine spotlights.

The tower sits on the coast of the Island of Vioey.

Ono said she chose Iceland "because it is a very eco-friendly country" that relies on geothermal energy.

"It's so beautiful," she said. "There's a certain strangeness to it. I would like to say it's magical."

The wishes Ono has collected -- about 495,000 so far -- will be buried in "capsules" around the tower, each topped with a tree. "Eventually it will be like a forest," she said.

Wishes can be submitted by mail or through the Imagine Peace Web site.

"This is the biggest birthday present I gave to John," Ono said. "He's very, very happy about it, I know."
By SANDY COHEN