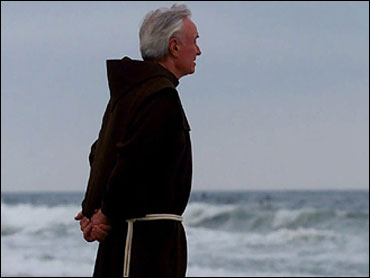 Kelly Ann Lynch, like so many others in Father Mychal Judge's vast congregation without walls, was devastated by word of the fire chaplain's death in the shadows of the World Trade Center.

"Those first few weeks, it was hard to see anything good," said the Pennsylvania mother of four. "It just felt so dark and so sad and so empty."

Time passed, until the darkness gave way to a bright idea. Lynch, whose father once served as an altar boy for Judge, became consumed with turning the martyred priest's life into a children's book, keeping his message of love alive for future generations.
"He Said Yes: The Story of Father Mychal Judge," a biography timed to arrive with the sixth anniversary of 9/11, is an illustrated 32-page walk in the Franciscan priest's sandals. M. Scott Oatman did the artwork.

"He left behind a legacy for all of us," Lynch said recently over breakfast at a New Jersey hotel, a short hop from the East Rutherford parish where her family first met Judge. "I took the most important parts of his story, and tried to simplify it. His story was meant to be shared."

The biography starts with Judge's birth in Brooklyn, where he had a job shining shoes to help his widowed mother make ends meet. It follows him into the seminary, through his ordination, to parishes in Massachusetts, New Jersey and finally Manhattan.

Lynch, in a simple, straightforward style, details how Judge picked up congregants for his far-flung flock at every stop: suburban families and the homeless; AIDS patients and alcoholics; firefighters and a paralyzed police officer; the loved ones of those killed aboard TWA Flight 800.

The tale ends on Sept. 11, 2001, when Judge became the first official victim of the terrorist attack that killed 2,750 people in the twin towers of the World Trade Center. His dying soon gave life to Lynch's remembrance.

Those touched by the peripatetic priest during his 68 years greeted word of the Paulist Press publication with warm reviews.

"It sounds sweet, a lovely idea," said actor and author Malachy McCourt. "Anything that perpetuates the goodness of this man is fine with me."

"He wrote notes and letters to children at their baptism," Fay recalled. "A few who saved them now treasure them with the affection of relics. ... Kids who never knew Father Judge can now read his story."

Lynch's ties with Judge predate her birth. He counseled her family in good times and in crisis - the sudden death of her grandfather, the death of a 2-month-old sibling, her own daughter's lifesaving liver transplant.

"He made you feel that you were the one special person in his life," said the 39-year-old Lynch. "What we've come to realize, six years later, is that he did that for everybody. He was a constant presence."

Besides her book, Lynch runs the nonprofit Mychal's Message, which provides aid to the dispossessed. Proceeds from "He Said Yes" will also benefit the homeless.

Lynch said getting the book in print was a long process. Plans fell through with one publisher, and talks with an agent moved slowly. She was on the verge of self-publishing, just to get the book out, when one of Father Mike's fellow Franciscans steered her to Paulist Press.

Everything clicked. And, as Lynch hoped, the book, which came out Tuesday, was released in time for the anniversary of the attacks.

Judge, possessor of a dry Irish wit, would have enjoyed the book's title, Fay said. The Franciscan father's instinctive "yes" made him indispensable to many, but it was also wearing him out, much like his phone answering machines, which routinely broke down from overuse every six months.

"It was his gift, and it connected him to thousands," Fay said of the late yes-man. "But it also wore him out. The title would make Mychal laugh."