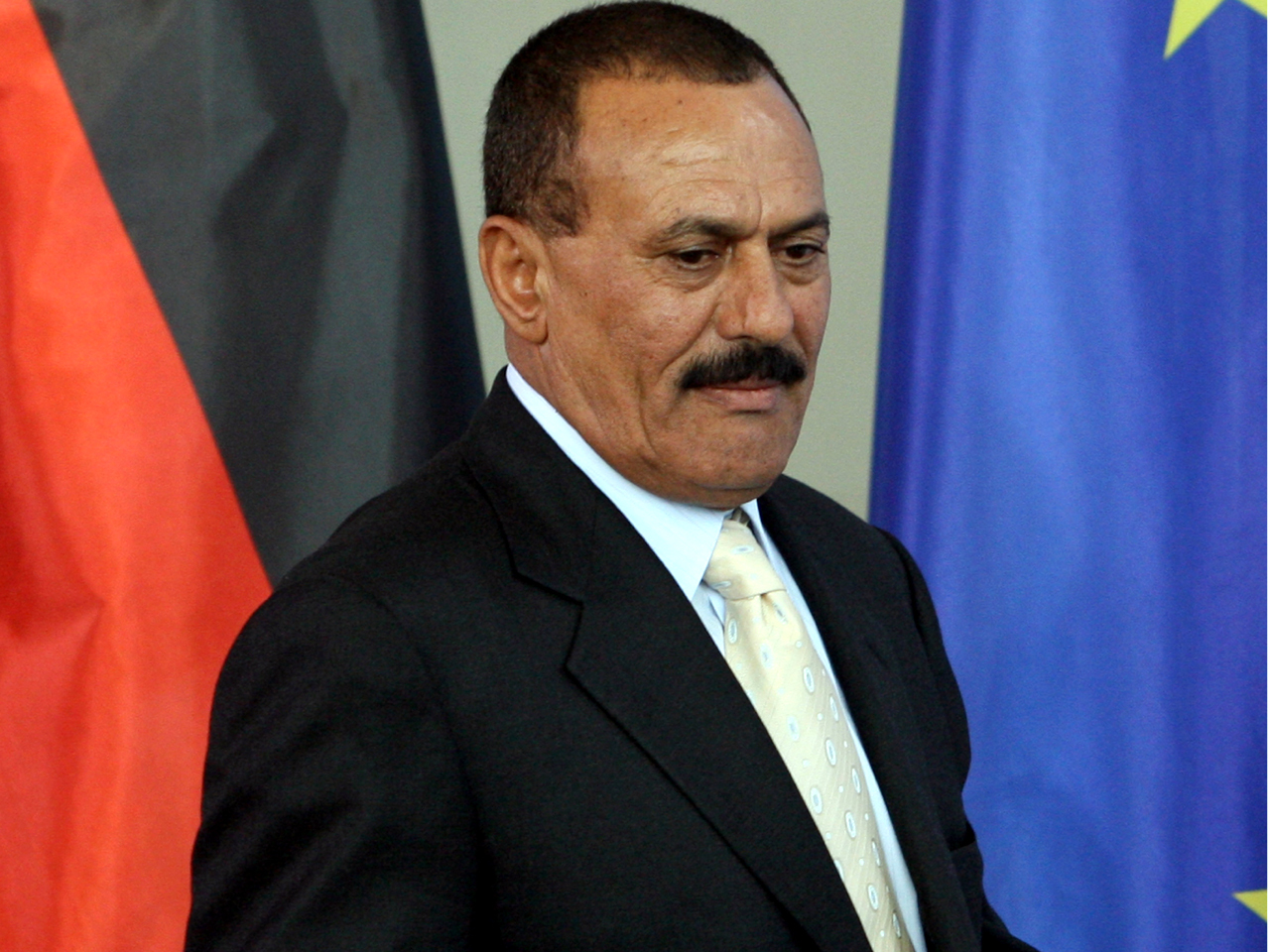 WASHINGTON - The Obama administration is weighing an unprecedented diplomatic act — whether to bar a friendly president from U.S. soil.

American officials were evaluating on Tuesday an awkward request from Yemeni strongman and longtime U.S. counterterrorism partner Ali Abdullah Saleh. Saleh has said he plans to come to the United States for medical treatment for injuries suffered in a June assassination attempt, and he has asked for a U.S. visa for entry to the country. Fearful of appearing to harbor an autocrat with blood on his hands, the Obama administration was trying to ensure that Saleh visits only for medical care and does not plan to stay, U.S. officials said.

Washington's hesitation reflects the shifting alliances and foreign policy strategy prompted by a year of upheaval in the Arab world. Saleh has served as an American ally against al Qaeda and will soon transfer power under a U.S.-backed deal with Yemen's opposition aimed at ending months of instability. He isn't subject to any U.S. or international sanctions.

But he also is accused of committing gross human rights violations during a year of internal conflict, and the U.S. is trying not to burn any bridges with Yemeni political groups likely to take part in future governments. Political asylum for Saleh in the United States, or the appearance of preferential treatment from an administration that has championed peaceful and democratic change, would be highly unpopular with Yemenis who've fought to depose their dictator of 33 years.

Officials close to Saleh said Washington's suspicion that he may seek political asylum was delaying approval of his trip. They spoke on condition of anonymity because of the sensitivity of the subject. But American officials appeared to substantiate those concerns and said they were troubled by Saleh's recent comments portraying his trip as a move designed to ease the political transition.

"What we're looking at now is a request to come to the United States for the sole purpose of medical treatment," State Department spokesman Mark Toner said, refusing to go into the specific of the evaluation. "That permission has not been granted yet."

Seeking to further underscore its position, the administration also issued a written statement later Tuesday insisting that no decision had been made. And officials at the White House and State Department refused to go any further publicly.

Toner declined to elaborate on the assurances the United States wanted from Saleh or offer a timetable for a decision. He also couldn't say whether any provisions existed under U.S. law to prevent the Yemeni leader from visiting the country — provided he assures officials he demonstrates he'll only stay temporarily.

In that case, Saleh almost surely will be granted entry, U.S. officials said, speaking on condition of anonymity because visa evaluations are supposed to be confidential. It's unclear when, if ever, the last time the head of state of a friendly government was blocked from visiting the United States.

One official went so far as to say Saleh's exit from Yemen might be beneficial by lowering the risk of disruptions in the lead-up to planned February elections. The U.S. is committed to doing everything it can to ensure those elections take place, the official said, but President Barack Obama's national security team was expected to make the final decision on Saleh's request. Obama was being briefed on developments while on vacation in Hawaii.

Demonstrators began protesting against Saleh and calling for his ouster in February. The Yemeni government responded with a bloody crackdown, leaving hundreds of protesters dead, and stoking fears of instability in a nation grappling with burgeoning extremism. Yemen's dangerous al Qaeda branch, known as al Qaeda in the Arabian Peninsula, has taken advantage of the vacuum to expend its presence in the south of the country.

International pressure has mounted for months for Saleh to step aside. A June rocket attack on his compound left him badly burned and wounded, and led Saleh to seek medical treatment in neighboring Saudi Arabia for three months. American officials had hoped he would remain there, but the Yemeni leader returned and violence worsened anew.

Last month, Saleh agreed to a Saudi-backed deal to hand power to his vice president and commit to stepping down completely in exchange for immunity. The deal further angered Saleh's opponents, who demanded he be tried for his attacks on protesters. Opponents also lament that he has continued to wield influence through loyalists and relatives remaining in positions of power, and many fear he may find a way to continue his rule.

Protests have expanded recently to include labor strikes, calls for Saleh to be put on trial and demands that his loyalists to be removed from office. Activists said troops commanded by Saleh's relatives attacked protesters in the capital of Sanaa over the weekend, killing at least nine people. Tens of thousands demonstrated the following day.

Saleh's immediate plans are unclear. The wily leader of three decades has maintained his rule over a country divided by tribal and regional loyalties by consistently outsmarting his opponents, but Toner said the U.S. is trying to remind everyone of the "importance of continuing along this agreed-upon path of political transition that will lead to the next election."

"We need to see that process continue regardless of where President Saleh is," Toner said.

An American official said Saleh's office informed the U.S. Embassy in Sanaa that the outgoing leader would leave Yemen soon and travel elsewhere abroad first, before possibly coming to the U.S.

The situation offers an eerie parallel to three decades ago, when President Jimmy Carter allowed the exiled shah of Iran into the U.S. for medical treatment. The decision contributed to rapidly worsening relations between Washington and Ayatollah Ruhollah Khomeini's revolution in Tehran, with Iranian students occupying the U.S. Embassy in Iran a month later.

Fifty-two American hostages were held for 444 days in response to Carter's refusal to send the shah back to Iran for trial.