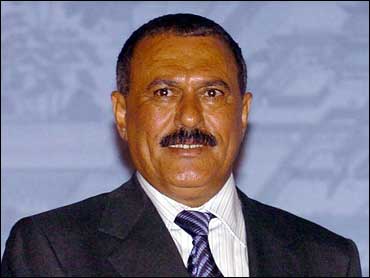 Yemeni President Ali Abdullah Saleh declared Saturday that he intended to run for another term in September's presidential polls, saying that he had caved in to popular pressure to reverse his decision of last year.

Saleh, who has ruled since 1978, said last July that he would not seek another seven-year mandate because he wanted to open the way for the peaceful rotation of power.

Saturday's announcement was the second time Saleh changed his mind about an earlier promise not to run, having done so in 1999 — the first time he faced a direct vote.

"I comply with the people's pressure and upon the people's desire, I will in run the coming polls," Saleh told tens of thousands of cheering supporters in San'a.

Students, civil servants and tribal leaders gathered outside the stadium where the Saleh's General Congress Party was holding a convention to nominate its candidate for the polls. They waved signs and banners reading "Continue the path," "We accept nobody but you," and "We'd sacrifice our blood and souls for you, Ali."

Saleh's party had pressed him since the convention opened Thursday to join the race.

Earlier in his speech Saturday, Saleh mentioned what he said were "the chants, statements, messages, poems and calls by the scholars, intellectuals, civil society and political parties" urging him to run.

An opposition figure said that the announcement was expected.

"We knew that the president would reach this result..."It is a farce; he is a comedian," Mohammed al-Mugaleh of the Socialist Party told The Associated Press Saturday.

Opposition figures were skeptical since last year's announcement that Saleh would follow through on his pledge. They viewed it as a ploy to provoke popular calls for him to run again or to open the way for his son Ahmed, 39, to take the top job.

Thousands of security forces were deployed around the country and the capital, and authorities arrested 15 political activists in a bid to prevent demonstrations urging Saleh not to run.

Saleh ruled first as president of North Yemen and then as head of the unified state after the May 1990 merger of North and South.

Meanwhile, in the province of Umran north of San'a, some 5,000 demonstrators from the al-Hasheed tribe also urged Saleh to join the race.

Opposition parties, having predicted Saleh's announcement, agreed Friday to name a single candidate to run against the president, although they did name him.
By AHMED AL-HAJ