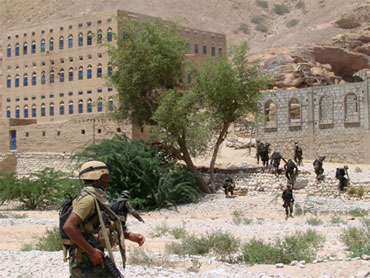 Yemen has slowly but surely become another front line in the battle with Islamic militancy.

Al Qaeda in the Arabian Peninsula (or AQAP), based in Yemen, is described by security officials as currently the most active terrorist franchise. U.S.-born al Qaeda leader Anwar al-Awlaki, among others, is based there as well.

The capital of Yemen, the exotic city of Sana'a, is about as far as the central government's authority stretches. The country's beleaguered president, Ali Abdullah Saleh, is fighting three internal wars with religious and regional-based militants, and vast areas of the hinterland have become prime al Qaeda training ground - exactly the way Afghanistan was before 9/11.

As the military pressure has curtailed al Qaeda's ability to train along the Afghan-Pakistan border region (where the leadership is thought to be hiding), militants have shifted to the more welcoming sands of Yemen - and, to some extent, Somalia, just across the Gulf of Aden.

It's also closer to traditional funding sources from sympathizers elsewhere in the Arabian Peninsula.

They have done so before. The Detroit Christmas underwear bomb plot was hatched in Yemen. Jihadi websites are full of bomb ideas, from picture frames to cassette players. And, of course, Yemen is where the USS Cole was attacked ten years ago.

There is increasing cooperation between the U.S. and Yemeni authorities, but the commitment (particularly in financial terms) is only a small fraction of the money being poured into Pakistan, for example. The Yemen government is also dependent, to some extent, on the support of the same tribes harboring militants.

"It's a place where Islamist extremists have ties with the tribal society, and it's the ancestral home of Osama bin Laden's family," Zarate said on "The Early Show on Saturday Morning." In addition, Zarate said, it's a difficult territory (mountainous in some parts, desert in other) for the government to affect full control. "So in some ways it's an ideal setting for al Qaeda to have a presence."

Although the al Qaeda leadership is still believed to reside in western Pakistan near the Afghan border, "clearly the al Qaeda presence in Yemen has grown more and more serious," Zarate said. "

"They've got fighters numbering up to 600, they're attracting Western recruits, they're training them, trying to deploy them. This is becoming a staging ground for al Qaeda to launch global attacks, and so it has to be an area of focus for the U.S. government."

Zarate also said he believed AQAP is sophisticated enough to launch attacks against American interests. "I think the problem here is that the affiliate in Yemen is made up of seasoned, hardened al Qaeda operatives, the leader Naser al-Wuhayshi, is a long-time bin Laden ally, trained by al Qaeda. The fighters that they have, along with the expertise, is real.

"And so the attempts that you see to probe our defenses, I think, are very real attempts by AQAP to find our vulnerabilities and to actually attack us. I think we've got to be quite conscious of that and defend against it."