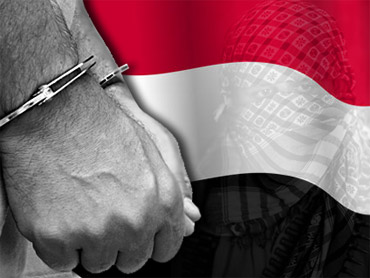 An American man from New Jersey is reportedly among 11 members of an al Qaeda cell arrested in Yemen last week in a security raid.

Several Arab newspapers and a local NBC television affiliate in New Jersey have reported that 26-year-old Sharif Mobley, of Buena Borough, New Jersey, is in Yemeni custody after killing at least one security officer while trying to escape from a hospital in the Yemeni capital.

NBC40 reports that U.S. government sources have confirmed Mobley's arrest in Yemen, and say "federal investigators have an interest in Mobley and are waiting for more information to come out of Yemen."

The Yemen Post reports that the suspect in the hospital shooting was a German-Somali dual citizen, but Yemeni foreign ministry sources confirmed on March 8, that the suspect was a U.S. national, not German.

Yemen's Interior Ministry said last week it had arrested 11 suspected al Qaeda militants during a raid on one of their homes.

The ministry said in a statement on March 4 that the men were captured while meeting in the family home of one of the members in the capital San'a. The father of one of the suspects was killed by police when he opened fire on police during the raid.

According to multiple reports in the Arab media, Mobley was among those arrested in the raid.

Speaking to NBC40, Charles Mobley said he had no information on the reported arrest of his son. "We don't know nothing, we're trying to hear something," he told the local reporter.

The young man's mother, who declined to speak on camera, reportedly told NBC40 the family had last heard from Ishraf in late January, when he told them he was in Yemen.

"I remember him from high school," Dawn Bass, a former classmate, told NBC40. "He was just outgoing, he wanted to be, like the center of attention. He was a nice kid."

The U.S. has become increasingly worried about militants based in Yemen since al Qaeda groups there and in Saudi Arabia merged last year to become al Qaeda in the Arabian Peninsula.

The group organized a failed attempt to blow up a U.S. airliner on Christmas day in Detroit with a bomber smuggling explosives in his underwear.

In a report to Congress made in January by the Senate Foreign Relations Committee, Sen. John Kerry, the committee chairman, warned that al Qaeda's growing presence in Yemen and Somalia represented a "ticking time bomb" to U.S. security.

Al Qaeda's Yemeni branch "seeks to recruit American citizens to carry out terrorist attacks in the United States," Kerry warned in his opening letter to the report. "These Americans are not necessarily of Arab or South Asian descent; they include individuals who converted to Islam in prison or elsewhere and were radicalized."