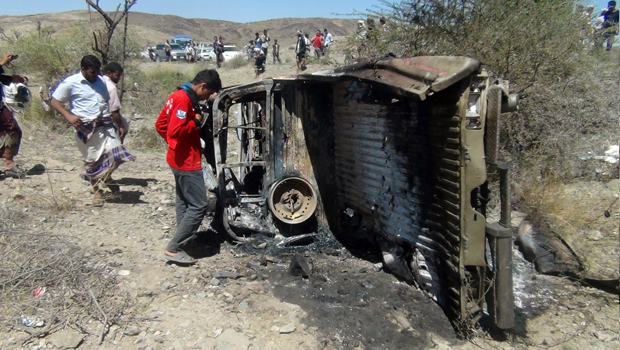 SANAA, Yemen -- A U.S. drone strike in southern Yemen killed at least nine suspected al Qaeda militants and three civilians Saturday, authorities said, as part of America's ongoing strikes in the country against what it considers the terror network's most dangerous local group.

A Yemeni military official said the early Saturday strike struck a vehicle carrying the militants in the Sawmaa area in the al-Bayda province as another car carrying civilians passed by.

A security official investigating the strike said one of the civilian survivors said the strike hit a white SUV, tossing it some 21 yards away. He said the survivor said they fled the flying debris and took shelter while "explosions" continued for another 30 minutes.

Then, the survivor said, another drone fired neared their car, killing one of his companions and wounded him.

A medical official said that the strike had killed three civilians and wounded three.

The medical and security officials spoke on the condition of anonymity because they were not authorized to brief reporters.

Later Saturday, Yemen's Supreme Security Council described the attack in a statement as an airstrike carried out by Yemeni authorities. It said the attack killed 10 members of al Qaeda who planned to attack "vital civilian and military institutions" in the area. It said the strike wounded one other person in the car.

The committee also said three civilians died in the attack while five were wounded in the other car. The conflicting casualty figures and details of the attack could not be immediately reconciled.

The U.S. considers Yemen's branch of al Qaeda, also known as Al Qaeda in the Arabian Peninsula, to be the most dangerous in the world. The group is blamed for a number of unsuccessful bomb plots aimed at Americans, including an attempt to bring down a U.S.-bound airliner with explosives hidden in the bomber's underwear and a second plot to send mail bombs hidden in the toner cartridges on planes headed to the U.S.

It overran much of the south in 2011. Yemen's army, supported by U.S. military experts and drone strikes, has pushed them back, but clashes continue.

However, civilian casualties in the strikes have sparked anger in the country and among human rights groups. According to the nonpartisan public policy institute New America Foundation, the U.S. has launched 99 drone strikes in Yemen since 2002.

There was no immediate U.S. comment on the strike. The U.S. will acknowledge drone strikes carried out by its military, but typically not those done in CIA operations.