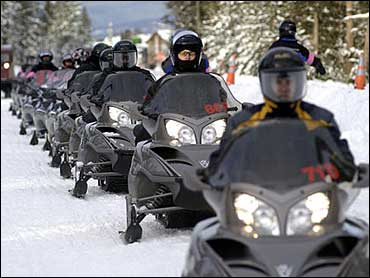 Randy Roberson figured he would get a permit to guide trips into Yellowstone National Park this winter, and invested $310,000 in new snowmobiles that would meet the park's new pollution requirements.

But a federal judge's ruling this week essentially banned snowmobiles from the park, and Roberson is worried about his bottom line.

"You spend six months getting ready to do business a certain way, and this changes everything," he said Wednesday.

The National Park Service and business owners had planned for the season under rules approved this year and expected to go into effect Wednesday morning.

The rules had called for limiting the number and types of snowmobiles allowed in Yellowstone and Grand Teton national parks and the parkway connecting them. It was aimed largely at curbing air and noise pollution, and park officials considered it a balance between virtually unfettered snowmobile access and an all-out ban.

But on Tuesday, U.S. District Judge Emmet Sullivan in Washington, D.C., ordered the Park Service to revert back to a Clinton-era plan that called for a gradual phase-out of snowmobiles in favor of mass-transit snowcoaches.

West Yellowstone Mayor Jerry Johnson, who also has a snowmobile rental business, said the quick change is "going to be devastating to our economy, no doubt about it."

Sullivan ruled the Bush administration had made an abrupt turnaround from the earlier plan, which intended to protect the park from pollution, without sound reasons. His decision means the number of snowmobiles allowed in Yellowstone every day will be 493, instead of 950.

It also means this could be the last season for snowmobiles in the park. Snowmobiling has been allowed for 40 years. But next winter, under the plan Sullivan ordered reinstated, only snow coaches would be allowed.

The International Snowmobile Manufacturers Association Inc., and BlueRibbon Coalition filed a request Wednesday for a stay of Sullivan's decision, saying it would prevent thousands of visitors from seeing Yellowstone and would devastate local economies. Sullivan said he would take written arguments.

"The fight's not over," said Bill Dart, public lands director with BlueRibbon Coalition.

Business and tourism officials said they aren't giving up on the season, despite Wednesday's messy beginning.

Some snowmobilers who booked reservations to ride in the park independently were turned back from the gate. Park officials said that under the new plan, all snowmobiles entering Yellowstone must be part of a commercially guide trip.

Yellowstone spokeswoman Cheryl Matthews said visitors with advance reservations were being given other options. "We're trying to work with them, to link them with guides or snowcoaches and tell them about trails outside the park," she said.