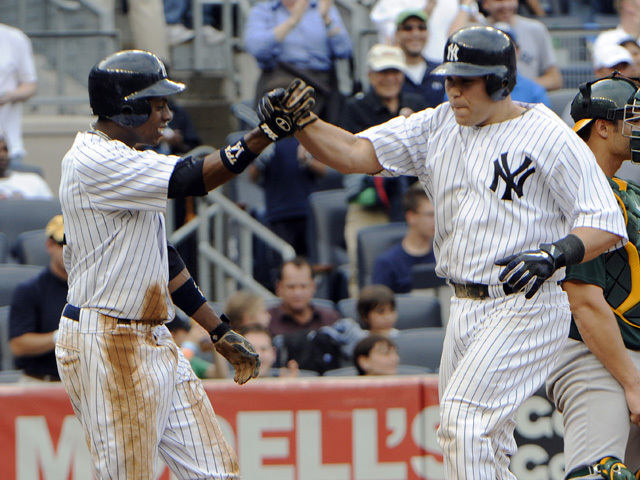 In nearly a century of storied slugging, the Yankees had never enjoyed a day like this.

On a dreary afternoon, some fans headed home with the Yankees trailing 7-1 after three innings and rain still falling in a game that began after an 89-minute delay.

Cano began the barrage with his slam in the fifth off starter Rich Harden, making it 7-6. Martin connected in the sixth off Fautino De Los Santos for a 10-7 lead. Granderson took his turn in eighth, launching a two-out drive off Bruce Billings.

Martin homered twice and doubled, setting career highs with five hits and six RBIs. Cano drove in five runs as the Yankees pulled off their biggest comeback win since 2006 and avoided a three-game sweep.

With MLB approaching its 200,000th regular season game next month, the Yankees put on a unique show with their bats — and gloves, too.

Former All-Star catcher Jorge Posada made his first career appearance at second base and had the final play, fielding a grounder and firing a one-hop throw that knocked over first baseman Nick Swisher and left him laughing as he caught it.