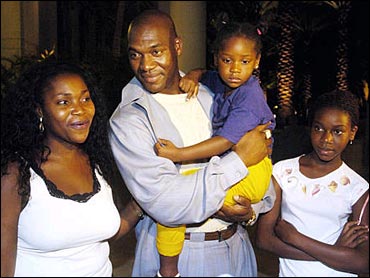 Jose Contreras said he's dreamed of showing his wife and daughters the sights of New York, from Yankee Stadium to the Empire State Building.

He finally has that opportunity.

Nearly 21 months after the New York Yankees pitcher escaped Cuba and reached the United States, his family defected and joined him.

Contreras, traveling from Baltimore where the team was playing, was reunited Tuesday night in Miami with his wife, Miriam, and daughters Naylan, 11, and Naylenis, 3.

"I'm going to do with them as people did with me," Contreras said through an interpreter. "I'm going to show them all the beautiful things New York has to offer."

Contreras' family was among a group of 21 Cubans that left Cuba on a 31-foot boat Sunday evening, Border Patrol spokesman Robert Montemayor said.

The group was captured by Border Patrol agents on Big Pine Key on Monday, Montemayor said. Cubans who reach U.S. shores are generally permitted to stay, while those caught at sea are usually taken back.

The family, looking tired but otherwise seemingly in good health, was processed and interviewed by immigration agents, then released Tuesday.

Contreras, a former star on Cuba's national team, defected in October 2002. After he established residency in Nicaragua and became a free agent, the Yankees signed him to a $32 million, four-year contract.

By Tim Reynolds and David Ginsburg