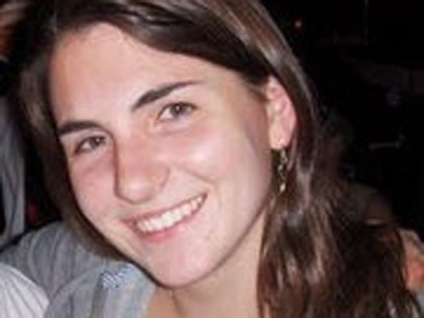 NEW HAVEN, Conn. - A Yale University student nearing graduation died in an accident in a chemistry lab machine shop after her hair was pulled into a piece of equipment, a federal official said.

Michele Dufault, a senior majoring in physics and astronomy, died Tuesday night after her hair became caught in a fast-spinning lathe, university President Richard Levin said. Her body was found by other students who had been working in the building, he said.

"This is a true tragedy," Levin wrote in a message to Yale students and faculty.

In a Facebook profile picture, Dufault is shown with long brown hair that fell below her shoulders. She died from accidental asphyxia by neck compression, according to the Connecticut medical examiner's office.

Dufault was a senior majoring in astronomy from Scituate, Mass., and was due to graduate in a month.

"By all reports, Michele was an exceptional young woman, an outstanding student and young scientist, a dear friend and a vibrant member of this community," Yale Vice President Linda Lorimer wrote in a message to Yale students and faculty. "We will find ways in the next day to gather to celebrate her life and grieve her loss."

The U.S. Occupational Safety and Health Administration has opened an inspection that will look into factors surrounding the accident and whether the lab complied with safety standards, said Ted Fitzgerald, an agency spokesman in Boston.

Yale was offering counseling to students. The lab was closed Wednesday and classes were canceled in the building that houses the lab.

According to her LinkedIn profile, Dufault was a Summer Student Fellow at the Woods Hole Oceanographic Institution in Woods Hole, Mass., last year.

The Yale Daily News reported Dufault was a member of the Yale Precision Marching Band and a Saybrugian.

"She was a living saint," the grandfather said. "She was a good, smart girl."

An uncle called her brilliant.

"She's a wonderful, wonderful kid and that should be celebrated. There's nothing but good things to say about her," said Frederick Dufault of Holliston, Mass.

Dufault intended to work in oceanography after graduating and played saxophone in the Yale Band, Levin said.

On its website, Yale's chemistry department says it maintains a state-of-the-art machine shop in which students, faculty and staff can build or modify research instruments. Access is limited to those who have completed a shop course, according to the website.

Levin, the university president, said he has initiated a review of the safety policies and practices of laboratories, machine shops and other facilities where undergraduates have access to power equipment. He said access will be limited to those facilities until the review is completed and monitors will be present.

"The safety of our students is a paramount concern," he said.

At the Noble and Greenough School in Dedham, Mass., where Dufault graduated in 2007, Head of School Robert Henderson Jr. said those who knew her were drawn to her personal strength, modesty, good humor and perseverance.

"Michele was an extraordinary young woman, one of the most precocious students who her teachers ever encountered," Henderson said. "She was simply brilliant. Her mind, her sense of curiosity, her perceptiveness, her sensitivity, and her enjoyment of what she did were extraordinary. She was a true intellectual. She was also distinctly humble, seemingly unaffected by her prodigious talent and academic attainments."

Kang Yi of the U.S. Labor Department's Occupational Safety and Health Administration said the university informed his agency that Dufault was operating the machinery for a senior project at the time of the accident Tuesday night.

Yi is the assistant area director for the OSHA office in Bridgeport, Conn. OSHA spokesman Ted Fitzgerald in Boston said the agency is reviewing jurisdiction in the case and evaluating whether it would conduct an inspection.