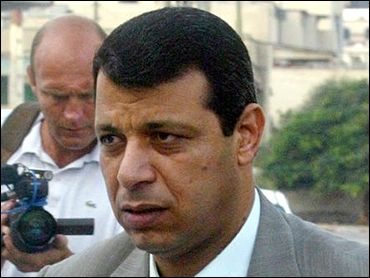 A powerful player in Palestinian politics and potential successor to Yasser Arafat called on the Palestinian leader to yield to growing demands for cleaner, more transparent government or face a groundswell of protest.

The remarks by Mohammed Dahlan, formerly the security chief for the Gaza Strip, were the boldest criticism of Arafat yet in weeks of internal Palestinian unrest. Dahlan stopped just short of challenging Arafat's authority, something few Palestinians of his standing have ever done openly.

In the latest example of that loyalty, gunmen broke up a meeting Sunday of West Bank activists from Arafat's own Fatah movement who were discussing the need for deep reforms in the Palestinian administration.

The gunmen identified themselves as members of the Al Awda Brigades, a small militant group loyal to Arafat, the symbol of the Palestinian national movement.

Elsewhere, Israeli troops shot and killed three armed Palestinians as they approached the Jewish settlement of Elai Sinai in the northern Gaza Strip, reports CBS News Correspondent Robert Berger. Assault rifles and a bomb were found next to the bodies. Two Palestinian militant groups, Islamic Jihad and Al Aqsa Martyrs' Brigades, said the men were killed in a "heroic operation."

In another incident, Palestinians in Gaza fired a homemade rocket at the Israeli town of Sderot. The rocket hit an apartment, but no one was hurt.

In southern Gaza, Israeli forces entered the Khan Younis refugee camp early Monday and destroyed a building allegedly used by Palestinians to fire mortars and rifles at a nearby Jewish settlement. Residents said one person was killed, a woman hit by a bullet that came through her window. Six others were wounded.

Police said the blasts were from homemade grenades tossed into prison sleeping quarters.

Dahlan appears to be angling for control of the Gaza Strip after Israel's planned withdrawal next year under Prime Minister Ariel Sharon's "unilateral disengagement" plan.

The Israeli proposal to pull its soldiers and settlers out of Gaza after 37 years of occupation has set off a power struggle between rival groups in Gaza. Many Palestinians suspect Dahlan's forces are behind two weeks of unrest over alleged corruption and cronyism in Arafat's government.

Dahlan blamed Arafat for the internal malaise and denied he is trying to replace Arafat. "The failure to organize led to this chaos," he said in an interview Monday on al-Arabiya television. "It's time that they bring the corrupt to account … in a way different from before."

In another interview Monday, Dahlan was quoted as saying he didn't want to destroy Arafat's image, but to "correct it so that it will stay beautiful." But if there was no movement toward reform by Aug. 10, Dahlan said, "a 30,000-strong protest movement would demonstrate in Gaza and demand its implementation."

"Arafat now sits on the bodies and ruins of Palestinians at a time when they most need support," Dahlan was quoted Sunday as saying by a Kuwaiti newspaper.

Abu Nasser, the analyst, said Dahlan is going for broke.

"It means that he is not competing with others who are less than Arafat, but with Arafat himself," he said.

The weeklong meeting broken up by the pro-Arafat gunmen was meant to discuss reform and new elections for the Fatah leadership, which were last held 15 years ago.

No one was injured by the gunfire, but the meeting broke up. Several delegates met with the gunmen to discuss whether the conference could continue.

In a letter released later to reporters, the Fatah leaders warned Arafat that corrupt officials "are using their position in the Palestinian Authority to steal and to break the law," and the Palestinian government was losing the public's trust.

"President Arafat, this might be the last chance for reforming our situation, before reaching the end. We need a revolution within our Fatah movement," said the letter.

Renewed criticism of the cronyism and corruption in the Palestinian leadership came after Arafat smoothed over a rift with Prime Minister Ahmed Qureia, who resigned two weeks ago over his inability to control an outbreak of lawlessness in the Gaza Strip.

Arafat persuaded Qureia to withdraw his resignation with a promise to share control of the security forces and to let Qureia's Cabinet ministers do their jobs.