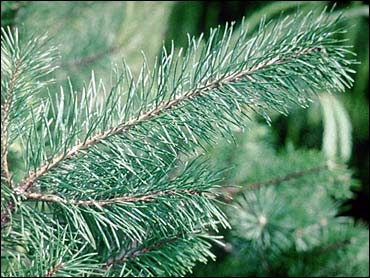 A popular type of Christmas tree, the Scotch pine, may have a gift for people with arthritis. A chemical in its bark fights inflammation, which could ease arthritis pain.

The news comes from a country close to Santa's North Pole home — Finland. Finnish scientists studied Scotch pine bark, reporting their findings in the Dec. 15 issue of the Journal of Agricultural and Food Chemistry.

Scotch pine bark's potential healing powers have been tapped before. A Scotch pine bark extract is concocted for traditional folk medicine and is still used as a dietary supplement in Europe, say the researchers.

The study doesn't say why people take the extract, but the pine bark is loaded with potent antioxidants. That made it irresistible to researchers including Maarit Karonen of the University of Turku's environmental chemistry department, who were hunting for plant chemicals with functional uses.

Karonen and colleagues brewed their own Scotch pine bark extracts in a lab. They examined the extracts in extreme detail, looking for key ingredients.

They identified 28 compounds, zeroing in on eight that looked particularly promising. All of the chemicals had been noted before, but not much was known about them.

Next, the researchers pitted the extracts against inflammatory cells called macrophages from mice. They tested several versions of the extracts. The most purified brew drastically reduced the cells' ability to produce chemicals that trigger inflammation.

One of the chemicals that was blocked, called Cox-2, is the same chemical blocked by a group of prescription medications, such as Bextra and Celebrex, that fight inflammation and ease pain.

However, it's too soon to know if Scotch pine bark will inspire new drugs for arthritis and other conditions involving inflammation. So far, the extracts haven't even been tested on living mice, let alone humans.

Still, the possibilities are worth exploring, say the researchers. Meanwhile, don't try to brew your own Scotch pine bark extract at home, they caution.