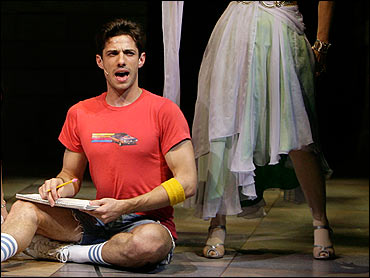 Cheyenne Jackson is trading in the "Hound Dog" of Elvis Presley for the disco beat of "Xanadu."

Jackson, who starred on Broadway in the Presley-inspired "All Shook Up," will take over a lead role in "Xanadu," the stage version of the cult Olivia Newton-John roller-disco movie now in preview performances at the Helen Hayes Theatre.

The actor replaces James Carpinello who injured his foot while skating during a rehearsal Tuesday.

A new opening date has not been set, "Xanadu" spokesman Pete Sanders said Thursday, but he added that Carpinello's two understudies — Andre Ward and Curtis Holbrook — would alternate in the role until Jackson joins the production June 22.

The show originally was set to open June 26.

"I'm excited to join the cast of 'Xanadu' while James Carpinello recovers," Jackson said. "My heart goes out to him, as he spent months working on this project, only to be injured so close to opening night. I am honored to borrow his skates."

In his early 30s, Carpinello made his Broadway debut in the 1999 musical "Saturday Night Fever," playing the character John Travolta played in the movie. The actor has been on "The Closer" and Tori Spelling's "So NoTORIous."

Jackson, 31, played Mark Bingham in the award-winning 2006 film "United 93." For his stage work, he won the Theatre World Award and was nominated as outstanding lead actor by the Drama League and Outer Critics Circle.

The musical also stars Kerry Butler as Kira, a Greek muse who attracts a painter dissatisfied with his career, the role to be played by Jackson.

"Xanadu" has a book by Douglas Carter Beane and features songs from the movie by John Farrar and Jeff Lynne. They include such pop hits as "Magic," "Party All Over the World," "I'm Alive" and the title tune.