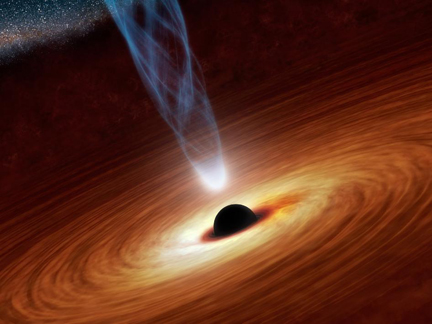 An innovative X-ray telescope operated by NASA, working in concert with a European Space Agency satellite, has directly measured the rotation of a supermassive black hole lurking at the heart of a distant galaxy, researchers said Wednesday.

The observation confirms predictions made by Einstein's theory of general relativity regarding gravity's ability to twist and distort the fabric of the cosmos and gives astronomers a powerful new tool to probe the evolution of galaxies and the black holes that now appear to be a common, if not required, feature.

"The result we're announcing today is that for the first time, we can definitely interpret features seen in the X-ray emissions from a supermassive black hole as due to to the hole's incredibly strong gravity," said Fiona Harrison, principal investigator of NASA's Nuclear Spectroscopic Telescope Array, or NuSTAR, X-ray telescope mission.

"What's amazing in this observation is we can see the warping and twisting of spacetime, the black hole distorting the very fabric of our universe. This distortion enables us to measure how fast the black hole is spinning."

The galaxy in question, known as NGC 1365, is 56 million light years from Earth. The black hole at the core of the galaxy is two million times as massive as the sun.

By definition, black holes are not directly visible because their gravity is so intense electromagnetic radiation cannot escape. But they can be detected by the telltale radiation generated as gas and dust particles are sucked in and heated to extreme temperatures.

Material falling into a black hole can form an accretion disk of debris spiraling in toward the hole's event horizon, the point defined by the body's mass and gravity beyond which nothing, including light, can escape. Once an object crosses the event horizon, it is forever lost to the known universe.

To measure the rotation of the black hole at the heart of NGC 1365, data from NuSTAR was combined with observations by the European Space Agency's XMM-Newton satellite, which is sensitive to lower X-ray energies.

The overlap allowed researchers to rule out alternative explanations, resulting in a remarkable three-day observation that "resolved a two-decade long problem," Harrison said. "We can now say the features in the X-ray colors seen from massive black holes can definitely be used to measure the black hole's spin."

In this case, the spacecraft studied X-rays reflected from the accretion disk around the black hole at the core of NGC 1365. Harrison said the rotational energy was equivalent to the output of a billion stars over a billion years.

Asked if she could translate that into a more readily understandable velocity, she pointed out that "black holes are really weird. ... It's not like we can paint a little dot on the black hole, on the event horizon, for example, and watch it spin around at some velocity. It's probably the most accurate to think of the amount of rotational energy captured, if that makes sense."

To at least one reporter, that was tough sledding. So Harrison provided an alternative explanation:

"We know spinning black holes actually twist spacetime and distort it," she said. "If you were standing near the event horizon of this particular black hole, you would have to turn around, because your spacetime is twisting, you would be turning around once ever four minutes just to stand still."

Regardless of the mind-boggling physics involved, the ability to directly measure the rotation of supermassive black holes gives astronomers a potentially powerful tool for studying galactic evolution.

"We know that today most, if not all, galaxies have a supermassive black hole at their center," said Arvind Parmar, head of Astrophysics and Fundamental Physics with the European Space Agency. "The one at the center of our Milky Way galaxy, for example, weighs as much as four million suns.

"We believe that these black holes were born when the universe was only about 10 percent of its current age. And when they were born, they only weighed 20 to 30 times the mass of the sun. The real question is how do they grow from these small objects to the supermassive black holes we see today?"

There are at least two possibilities. Black holes can grow by accretion, that is, by sucking in surrounding material, or by collisions, when one black hole effectively merges with another.

Accretion can cause rapid spinning while black hole mergers can lead to different rates depending on the orientations of the colliding holes. The ability to measure that rotation could help astronomers figure out which process is more common and what effect that has on a galaxy's evolution.

"Even with these two wonderful missions, we can only measure the spins of these black holes in nearby bright galaxies," Parmar said. "What we'd really like to do is extend these studies to the more distant universe and see how the average black hole spin changes with cosmic time.