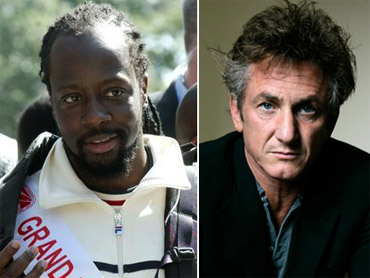 The potential front-runner in Haiti's Nov. 28 election is attempting a difficult and potentially dicey transformation: From multimillionaire international recording artist to leader of one of the world's poorest and most dysfunctional countries - and doing so through a pivotal and difficult election.

Among the best-known figures in his native country, Haitian-born, Brooklyn-raised singer Wyclef Jean supports the U.S. and U.N. vision for rebuilding Haiti's economy after its magnitude-7 earthquake - a plan that encourages private investment in factories, agriculture, mining and other areas.

Jean also said he would encourage donors to invest heavily in education.

Jean's leap from entertainer to prospective head-of-state is also leading to some interesting transitional moments. After previously listing his age as 37, as a candidate he suddenly jumped to 40 years old.

The worldwide attention that his presidential bid attracts also means scrutiny and criticism - turning the campaign into what Jean called a "combat sport."

The singer fumed when aides told him that actor Sean Penn, who cofounded the J/P Haitian Relief Organization and has been managing an earthquake-survivor camp in the Haitian capital since the spring, had accused Jean of not spending enough time in Haiti after the quake and misappropriating $400,000 of the $9 million his charity, Yele Haiti, raised after the disaster.

Speaking on CNN's "Larry King Live" yesterday, Penn said that while he does not know Jean and credits him with being "an important voice" in rebuilding Haiti, he is "very suspicious" that Jean may be backed by corporate interests and opportunists who want to take advantage of Jean's celebrity.

"What the Haitian people need now is a leader who is genuinely willing to sacrifice," Penn said. "And one of the reasons I don't know very much about Wyclef Jean is I haven't seen or heard anything of him in these last six months that I've been in Haiti."

Calling Jean a virtual "non-presence" in Haiti since the January 20 earthquake, Penn said Jean's donors must be closely examined, "because this is somebody who is going to receive an enormous amount of his support, if he continues his campaign, from the United States.

"I just want Sean Penn to fully understand I am a Haitian, born in Haiti and I've been coming to my country ever since (I was) a child," he said. "He might just want to pick up the phone and meet, so he fully understands the man."

In an interview aired this morning on "The Early Show," Jean told CBS News correspondent and "Morning News" anchor Betty Nguyen, "I have to take what I used to sing about" - poverty, hunger, AIDS - "and turn it into policy."

Jean stepped down from his chairmanship of Yele on Thursday ahead of filing paperwork for his run for office. The organization has been accused of pre-quake financial improprieties that benefited the singer.

Before campaigning can begin, Jean must be cleared to run by Haiti's eight-member provisional electoral council. Among the requirements he must fulfill are proving he has never renounced his Haitian citizenship by holding another (U.S.), and that he has been a resident of Haiti for the last five years, which by most accounts he has not.

The campaign will argue that Jean's status as a Haitian ambassador-at-large - a post he was awarded in 2007 - exempts him from having not spent more time in the country of late.

If approval comes, Haiti's particular brand of Byzantine and often brutal politics will really begin. Jean's charisma and popularity in Port-au-Prince's vast slums could draw comparisons - some favorable, others not - to the popular but divisive former President Jean-Bertrand Aristide, who was flown into African exile aboard a U.S. plane during a bloody 2004 rebellion.

In an interview with the Associated Press Thursday, Jean also responded directly to a revelation published this week on the U.S.-based website The Smoking Gun. The article stated the hip-hop star owes the Internal Revenue Service more than $2.1 million for taxes from his individual 1040 returns for 2006, 2007 and 2008.

"First of all, owing $2.1 million to the IRS shows you how much money Wyclef Jean makes a year," he said, pledging to publish an accounting of his finances online and to repay the money he owes.